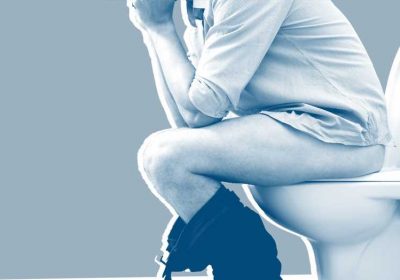 Do guys get boners when they poop? That might not be something you've been losing sleep over (and if you have, no judgment here). But it's the kind of thing that, well, a lot of people are asking about, thanks to a viral post that claims this is actually true.

The whole boner/poop question started with a TikTok video that's so far racked up an astounding 2.3 million views and counting. The clip shows user Brandon Ball making a thumbs up, with the caption, "Wait til girls find out that guys get bonners (sic) when they poop."

Yep, that's it (though we wish he spelled "boner" correctly, but that's beside the point). So we clearly need more information—namely, is this actually a thing, and if so, why?

Well, Ball isn't the only TikTokker to have experienced a boner when he's on the toilet. User @leahashlie asked her boyfriend, and he admitted that it happens to him.

The expert verdict: It definitely can happen, according to Jesse N. Mills, MD, associate clinical professor of urology and director of The Men's Clinic at University of California Los Angeles. "Men can get erections during bowel movements, because the pressure it takes to push out stool increases blood flow through the penis," he tells Health.

Nobody really knows how typical this is—probably because it's not the sort of thing people talk about. (Except on TikTok, obviously.) And it's unlikely to be a sexually stimulated erection, unless a guy happens to be aroused by bowel movements, of course. "Rather, it's a vascular phenomenon," Dr. Mills explains. The vascular system, also known as the circulatory system, consists of vessels that carry blood and fluid through the body, delivering oxygen and nutrients to body tissues and removing tissue waste matter.

Dr. Mills says getting a boner when you poop isn't dangerous, nor is it clinically significant. In other words, if it happens to you, there' no need to make an appointment with your doctor. Getting an occasional boner while going number two is just one of those weird and wonderful things our bodies can do.