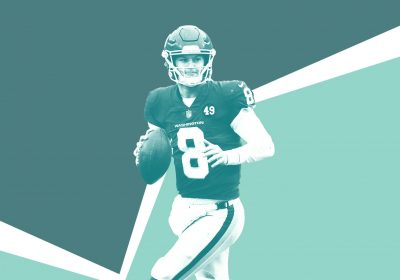 It's no secret that football is a tough sport, but a gruesome injury suffered by Washington Football Team quarterback Kyle Allen on Sunday showed how intense it can get.

The official diagnosis, per ESPN, was that Allen, 24, dislocated his ankle and suffered a small fracture when Washington played the New York Giants. But video of the incident, shared by Twitter user Rudy Gersten, shows this was no minor injury.

Allen was injured when Giants player Jabrill Peppers lost his balance and his leg accidentally flew into Allen's knee, making Allen's leg and ankle twist in a way that, well, it shouldn't have. Pepper was penalized for roughing the passer, and he later told the New York Post that the injury was unintentional. "You never want to see a guy go down like that," he said. "I prayed for him. I apologized to him. I definitely didn't intend for that to happen. I'm trying to play hard and make a play for my team. I wish him a speedy recovery."

ESPN later reported on Monday that Allen is expected to undergo surgery in the coming weeks, though it's unclear if his injury will sideline him for the rest of the year, or just part of it. "It might be premature to say he's out for the year," Washington coach Ron Rivera said.

It's hard to watch the video of Allen's injury and, really, if you have a weak stomach, it's best to take a pass. But it's understandable you might have some questions. Here's what you need to know.

What happens during a joint dislocation, and how common is the injury?

A dislocation is a joint injury that forces the ends of your bones out of their usual position, according to the US National Library of Medicine's MedlinePlus resource. You can suffer a dislocation anywhere you have a joint, but the injury is more common in your ankles, knees, shoulders, hips, elbows, and jaw.

Dislocated joints are usually swollen, very painful, and visibly out of place, MedlinePlus says. Basically, these are pretty intense injuries.

Dislocations happen enough in sports, Kenneth Jung, MD, foot and ankle surgeon at Cedars-Sinai Kerlan-Jobe Institute in Los Angeles, and a foot and ankle consultant for the Los Angeles Rams, tells Health. "I've seen it where people are playing sports and land awkwardly," he says. It's especially risky when other people are in close proximity, Dr. Jung says: "It's an individual who is not functioning in an isolated fashion, and multiple forces can be exerted on an extremity."

A dislocation is a little more common in football. "Football is similar to MMA [mixed martial arts]," Dr. Jung says. "If you just have your own bodyweight, that's one thing. But the force of another individual coming through your extremity…your joint essentially gets bent past where it can go. At that point, either a bone is going to break or a ligament is going to tear."

There is good news for everyone else who isn't Kyle Allen: This kind of injury isn't common in the general public. "This is not going to happen while you're just walking around," Dr. Jung says.

How is a dislocated joint treated, and how long does it take to recover?

For starters, a dislocated joint is an emergency, Medline Plus says. So, if this happens to you or a loved one, you want to get them to a hospital ASAP.

From there, treatment depends. "You have to locate the joint and stabilize it," Dr. Jung says. That's usually done with the help of an X-ray and MRI to help figure out if there was soft tissue damage as well, he says. If there has been a fracture, someone will often need surgery to help stabilize the bones; If there was no fracture, but ligaments have been damaged, they also may need to be surgically repaired or stabilized. In some cases, a joint may need to be manipulated to reposition the bones, MedlinePlus says.

Once a joint is stabilized and repositioned, it needs time to heal. (Dr. Jung says this can take four to six weeks.) During that portion of the recovery, you'd do what Dr. Jung calls "protected weight bearing" so try to avoid re-injuring the joint but also making sure it doesn't stiffen up from lack of movement. After that will come physical therapy to get back to normal function. "At minimum, recovery would take at least a few months," Dr. Jung says.

Despite his intense injury, Allen seems to be doing OK. In an Instagram post shared Monday, he wrote that "this is the unfortunate part of the game we play, but there's no adversity you can't overcome!!"

"I promise I'll be back stronger, and better because of it," he added. "Loved every second of my first year in Washington, I can't wait for more!"