Spahn critics, present their own model for organ donation rules 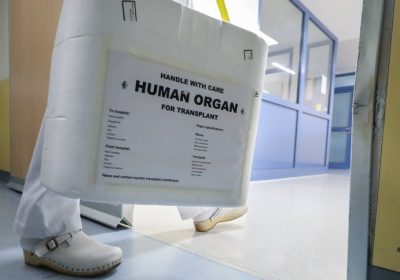 Statistically, three people die in Germany every day, because they waited in vain for a life-saving Organ. The Bundestag wants to change that. A cross-party group to the Minister of health, Jens Spahn, has presented its concept of a contradiction solution already, now Deputy to draw Green Manager Anna Lena Baerbock. Patients conservationists are not convinced of the two concepts.

Instead of a contradiction solution Baerbock, and the Left-Chairman Katja Kipping set to mandatory, periodic surveys. Accordingly, citizens should be informed about organ donation when they apply for an identity card. Your decision should then be online and recorded in a Register and changeable at any time. The plans are circulating for some time now the official draft.

It further States that family doctors advise their patients every two years about Organ and tissue donation and to encourage registration in the online register. So, the organ donation will be maintained as a “conscious and voluntary decision” that should not be state enforced.

Originally, the two plans for the reorganisation of organ donation, according to Baerbock-group should be presented at the same time. Spahn, however, is ahead, as he presented the plans for a double contradiction solution at the beginning of April. The green Deputy Kirsten Kappert-Gonther accused him of “a parliamentary foul game”.

A double contradiction solution would mean that in future, all of Full age apply in Germany as a donor. Unless the interested parties have objected to during his lifetime. In cases of doubt, the members should be allowed to decide. However, you would have to make it plausible, why the Deceased would have an organ donation rejected. (Which would mean the scheme for patients, read here.)

As a response to the presented plans, Spahn said that he himself had been, years ago, for a contradiction, solution. The efforts of the past years had not led to more organ donations. He agreed to Baerbock, that there should be more education – however, this should not come from civil offices, but exclusively by Doctors.

“Silence is not consent”

The German Foundation for patient protection, welcomed the group to Baerbock set it to an explicit decision to be an organ donor. “Silence does not mean consent. So, the mistrust in the population is more likely to be reinforced”, said the Executive Board Eugen Brysch. Essential to a conscious engagement with the subject rather. To do this, there is a need for a factual, neutral and unbiased information and advice. In addition, it must be clear that any decision will be respected, no matter how it fails – also, if someone does not decide nor want to.

Both designs were, however, the Central Problem, said Brysch. “The existing organ donation system is non-transparent and confused a lot of people.” The state should not make the distribution of life chances more by private institutions. The transplantation system belong in state hands. In addition, patients need to Organ waiting lists and more legal certainty. “Because until today it is unclear whether civil, Social or administrative courts are in charge when decisions need to be reviewed.”

So far, a so-called decision-making solution that everyone has during the lifetime of the option, to decide the case of brain death for organ donation and to document this in an organ donor card. A duty to deal with the question, there isn’t currently but.

The procedure brings a crucial Problem: Although many people in Germany are theoretically willing to donate after their death bodies. According to a representative survey by the Federal centre for health education 2018 showed that 81 percent of the German Organ and tissue donation are positive. But only 32 percent of the respondents had already filled out an organ donor card.

On the draft of the possible new rules of the Bundestag is to decide without group requirements. Currently, nearly 10,000 patients are waiting in Germany for a life-saving Organ.

Summarized: the number of organ donations increase in Germany, are currently discussing two draft laws. A group to Minister of health, Jens Spahn (CDU) calls for a contradiction, solution. Thus, adults can be donors automatically to potential Organ, unless there is a contradiction. MP Green Manager Anna Lena Baerbock speak, however, for awareness-raising campaigns, as well as for a Register in which every citizen will hold on to its decision and may at any time revise. The vote passes without group coercion and is expected at the earliest in the autumn.