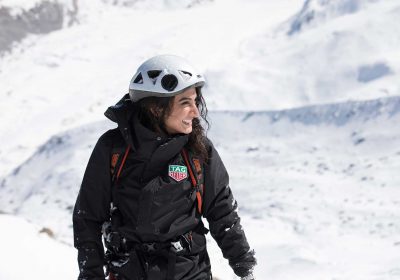 At the age of 25, just when her parents thought she should be conforming to the Saudi Arabian expectations of marriage and motherhood, Raha Moharrak had other ideas.

There were many reasons not to climb Mt. Kenya that day. It was the drab rainy season and I only had two days to explore it and it didn’t help that I had a cold. At breakfast, I could hardly keep my head up. But I couldn’t just sit there and not climb. I couldn’t go all the way to Kenya and not see it’s beautiful mountain. I’m too stubborn to give up. Besides, I really wanted to go up there because African mountains hold special memories for me. The very first mountain I fell in love with was Kilimanjaro in Tanzania and Mt. Kenya echoed it closely. Despite the heavy rain and a fever it was gorgeous, being up there again filled my heart with memories. Reliving the rush of excitement and awe of being on Kili all those years ago was absolutely worth it. Nether the rain nor the flue could keep the smile from my face and heart. #dontcrackunderpressure #kenya #worldnomad #travel #adventure #naturalhair #iphonex #explorers

That something was climbing Africa’s highest mountain, Mt Kilimanjaro, with little training and no idea of what it would entail. Raha was ill-prepared, ill-equipped and not as fit as she should have been, but she did it, picking up a fresh appreciation and new love of mountaineering. At first her family wasn’t supportive, especially her father. “Like any family, let alone an Arab family, they thought I was insane,” she says, laughing. But after that first successful climb, where she vowed never to be as underprepared again, she set her sights on the Seven Summits (the highest mountains on every continent).

It has been an absolute pleasure collaborating with @tagheuerme on this project! It’s special to me for many reasons, not only because it's so beautiful visually, it also captures the honest emotions and love behind what I do in such a unique way. This has been one of my favorite collaborations and I can't wait to share the full clip with everyone! #naturalhair #tagheuer #mydubai #fortheloveofthesport #dontcrackunderpressure #adventure

Two years and several summits later, Raha became one of the very few people to stand on top of the world on Everest. At 27, she was the youngest Saudi and the first Saudi woman to do so. And although the moment was overwhelming, she says her greatest achievement to date is making her parents proud.

“Look, it’s pretty fantastic to climb the highest mountains in the world,” Raha admits, “But to be able to break the mould, prove people wrong, and give [them] a different outlook of who you are and what you represent – that’s really special.”

Her advice for us?

“Embrace fear, don’t make it your enemy. Always do what scares you. I’m friends with fear, so I make sure it doesn’t erode me.”

Discover what the Women’s Health initiative WinS is and how you can get involved here.