Home » Personal Health » Drag and Bodybuilding Were My Lifeline. The Pandemic Changed Everything.

Drag and Bodybuilding Were My Lifeline. The Pandemic Changed Everything.

Rock Evans is a fitness instructor, bodybuilder and drag queen named Miss Toto. In 2014, Evans moved to Miami and started bodybuilding. They wanted to challenge themselves after completing challenges like the Spartan Race and the Mud Run. Their first competition was September 2016. As for drag, Evans became Miss Toto in 2015, but they’ve known about drag since they were a child. They moved to Chicago in February 2019. With their income from the gym and drag coming from in-person-only events, COVID-19 threatened both of their livelihoods. Now that people are heading outside again, Evans reflects on how the pandemic changed their outlook for the better.

I was on a linear path of bodybuilding. I was getting bigger, getting stronger. But then once the pandemic happened, I had only my home gym. It was really only a couple kettlebells and my boyfriend happened to find the barbell in his grandma’s basement. It was kind of a test to myself as a fitness expert and a fitness professional to see what type of workouts I could make for myself, and then what workouts I could create for other people that are accessible and free.

For drag, everything went online. It went from traveling all over the world, to the UK, to Canada. And then the world shut down, and all my gigs were canceled. I had no income. My income came from the gym and it came from drag. I went from having everything to having nothing.

I ACTUALLY HAD my first introduction to drag through my mom. My first memory of drag is having one of her friends dressed as Ursula come to my house, and perform at our salon. I was obsessed with The Little Mermaid. And I obviously thought that was like, the real Ursula. But looking back on that, I’m like, ‘That’s pretty rad that my mom, like, not only had queer friends, but friends enough that they would get in drag on a random day for her kid,’ you know? I thought that was really cool. So I’ve been involved in drag and known about it for a while, but never really got started in doing drag myself until I was in college.

I was in a fraternity. And with our fraternity, we had the responsibility of throwing a party for the brothers. And me and my two friends got dressed in drag only once a semester for that party. So I started dabbling in drag as an adult with them, but never really leaned into it. 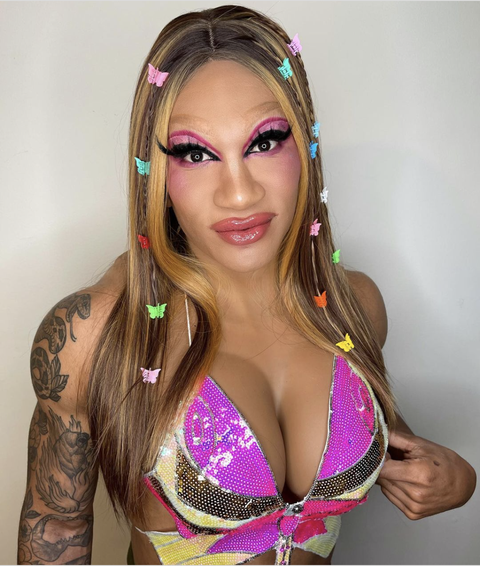 And then once I moved to Miami, I kind of got my whole world rocked when I met a big group of drag queens that weren’t your stereotypical drag queen. Like, they were hairy. They were bearded. And as someone who was more on the muscular side, that’s when I was like, ‘Okay, these hairy, bearded people can really push the envelope and do drag. What’s really stopping me from doing drag?’ And that’s what really pushed me.

Plus, I never really had a large, queer community that I was surrounded by. I always had my two or three friends. But this was a large, queer scene. So that is really what pushed me to even just start going to these [drag] parties. Then through the parties, I was invited to start performing. Then it went from performing once a month to performing in that [drag] party once a month, but also having a weekly Bingo Night at one of the local bars. And then things have just kind of snowballed into where they are right now.

I AM KNOWN as like, ‘The Bodybuilder Barbie.’ There are a lot of muscle queens, but no one who actually competes like that. I haven’t seen anyone but myself actually step on stage and compete in the physique competition, and who is also doing drag at the level that I’m doing it. And even like taking it a step further, a lot of the muscle queens aren’t necessarily showing their bodies in their drag. That’s something that I’m always kind of pushing for, like, I’m gonna have my arms out. I’m gonna have my abs out. You’re gonna see this body that I worked for, and it will be in my drag.

Also muscles don’t need to be equated to masculinity. Especially in the fitness space, and especially within the physique bodybuilding space, there are so many women that are just shredded and muscular and jacked, but it doesn’t make them any less female or any less feminine. So it’s like pushing the envelope in both directions.

INSTEAD OF THINKING of digital drag as a problem, I used it as something creative to push myself or something to push myself creatively. So instead of like some of these performances that are really limited to the stage, I was able to take some of the ideas that I’ve had that couldn’t be done on the stage and make them into a video for a digital drag show. With the ability of a green screen and proper editing, you can really put yourself in any fantasy situation that you’d want. So I really used this last year to reevaluate who I am and why I do drag anyway, because you can get easily caught up in the bookings and surviving, especially because that was my income. And now I’m in a different position where it’s I kind of found and rediscovered why I do drag in the first place, to where I can put money and energy into developing, and keep pushing that character, and keep growing Miss Toto without sacrificing my creativity and my art. 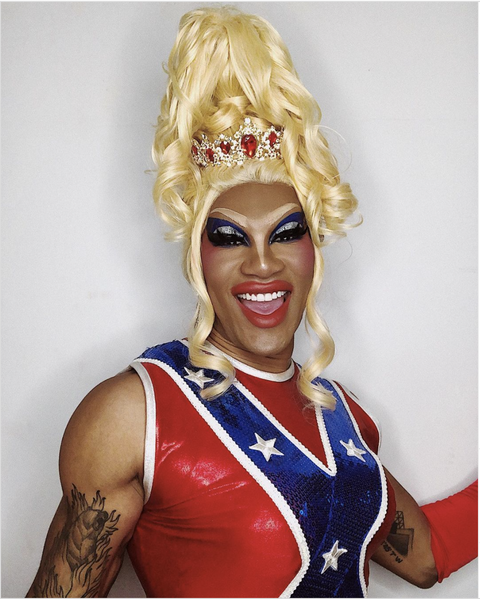 SO NOW THINGS are starting to open again. I’m vaccinated and the world is getting vaccinated or at least in the United States. I’m able to do more traveling gigs back like I used to, planning prides, which is going to be a very nice summer. And now I have plans to go to Germany as well in the fall. So it seems like things are going back to the way that it used to be as far as drag but I’m re-entering it with a different perspective. Opposed to it being all about making money that I can pay my rent, [I realized] this is an experience that not many other people can have, which I’m lucky enough to be able to have.

Who am I going to meet? And how can I let my drag affect people? Because I’ve noticed, like, in the past year, especially, black queers with the Black Lives Matter movement and everything that happened last summer, like I kind of found my voice in that and was connecting with so many other queer individuals and black queers specifically, about just like how loud and authentic I’ve been, in which I didn’t ever think of it that way until they told me. They were like, ‘I really appreciate how authentic you are. I appreciate how loud and brash and unafraid to just say what’s on your mind.’ And I don’t think I would have been able to do that as Rock. But somehow and for some reason, people tend to listen to me a little more as Miss Toto as the figure, as the drag queen, versus Rock out of drag.