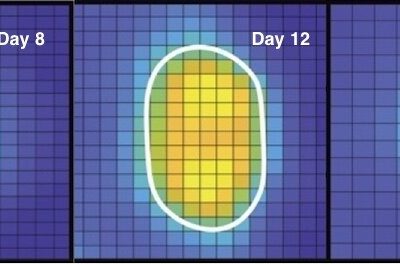 PD-1 is a protein on our T cells that normally keeps these immune cells from running amok. A growing number of cancer drugs are designed to inhibit PD-1, enabling patients’ T-cells to attack and kill cancerous cells. PD-1 blockers such as pembrolizumab (Keytruda) have been helpful in treating several cancers including melanoma, non-small cell lung cancer, kidney cancer, bladder cancer, and head and neck cancers.

But the drugs don’t work equally well in all people, since not everyone’s tumor responds to PD-1 blockade in the same way.

“The problem with immunotherapy is it’s very hard to track the response, and see if there’s an effective response or not,” says Mohammad Rashidian, Ph.D., who conducted the research as part of the Program in Cellular and Molecular Medicine at Boston Children’s Hospital. (He now has his own lab in the Department of Imaging at the Dana-Farber Cancer Institute.)

In part this is because in metastatic cancer, there may be many lesions in different parts of the body, and tumor cells can come in different forms. Using PET imaging, however, it is possible to see whether a specific tumor lesion is responding to treatment, since it provides a whole body scan.

In a mouse model of colorectal cancer, Rashidian and colleagues used very small antibody fragments known as nanobodies, that home in on CD8+ T cells (also known as killer T cells), the main immune cells that are activated when PD-1 is inhibited. The nanobodies carry radioactive tags that show up on PET imaging.

As described in a report in PNAS, published online last week, this allowed the team to observe the CD8+ T-cell response to treatment over time. Using PET, they imaged about 100 mice with colon cancer.

“Without fail, we could see that if the animals were responding, the CD8+ cells expanded, moved from the periphery in large numbers and infiltrated the tumor core,” says Rashidian. “You could see the tumors shrink.”

Rashidian thinks the results could be useful for oncologists to evaluate an ongoing response to immunotherapy. PET imaging is already available clinically, and nanobodies have also been used in patients; a nanobody-based drug has recently been FDA-approved.

In a second part of the study, the team explored how PD-1 inhibitors affect the overall tumor “microenvironment,” which includes immune cells charged with ingesting dead and dying tumor cells. They performed single-cell RNA sequencing—going cell by cell to see what genes were on or off.

“We wanted to see, in a tumor that’s responding to PD-1 inhibitors, how the immune landscape changes,” says Rashidian.

In mice that responded to PD-1 blockers, the environment around the tumor had become more hostile. For example, macrophages, a type of immune cell, had morphed into a more “anti-tumor” state, secreting more signals that helped activate the CD8 cells.