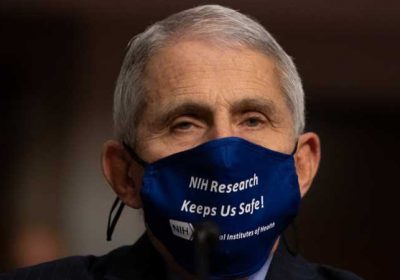 It’s easy to think the election will be the last hurdle to overcome in 2020 but, thanks to COVID-19, the fall and winter months will continue to threaten our sanity. According to STAT News, the onset of cooler, less humid weather and its effect on the spread of the virus has many concerned and some think the powers that be should be doing more to enforce preventative measures like social distancing and masks. As the director of the National Institute of Allergy and Infectious Diseases, Dr. Anthony Fauci has always encouraged the use of masks but he has never supported the notion of requiring masks as a federal law, reportedly saying he did like the idea of being “authoritarian from the federal government” (per CNN).

More than once throughout the pandemic, Fauci has implied that the American people are responsible enough to protect themselves without being forced to do so. In an interview with NPR (via CNN) in July, Fauci said, “I have trust in the American people that if we put a strong emphasis on the importance of wearing masks, that we will come around and do that and get that percentage up above the relatively low percentage of people that are using masks.” He even said at a news conference in September that a national mask mandate would likely not work. But yesterday, that all changed.

According to CNN, Covid-19 cases have now risen in 32 states while numbers remain steady in 17 others and Friday’s number of new infections exceeded 75,000 with more than 800 deaths being reported. Fauci blamed the increase in part on the public’s failure to comply with simple preventative measures like hand-washing and wearing masks. In response to the current state of things, Dr. Fauci told CNN on Friday, “Well, if people are not wearing masks, then maybe we should be mandating it.” He added, “There’s going to be a difficulty enforcing it, but if everyone agrees that this is something that’s important and they mandate it… I think that would be a great idea to have everybody do it uniformly.”

Difficulty enforcing a mask mandate is one thing, getting it signed into law is another, according to NWF Daily News. The president could issue a mask mandate and Congress could pass a law requiring them, but the government’s ability to enforce it only goes so far. That’s a problem, especially since some argue a mask requirement violates their constitutional rights — a conflict that only adds to the never-ending frustration of COVID-19.