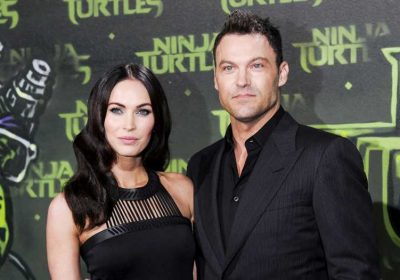 “I am a much stricter person,” the actor, 46, told Us Weekly exclusively on Monday, November 4, while promoting the PUBG MOBILE #FIGHT4THEAMAZON campaign to help the nonprofit Global Green save the Amazon rainforest. “I’m a bit more OCD. To me, I would rather have no glitter at all in the house. To Megan, she doesn’t, so that was an area where we bumped heads.”

“You’re like, ‘You know what? This means something to me and this not so much,’” Green explained. “We both appreciate what she’s really good at and what she does well, and I appreciate what she does better than myself. I’m not only OK with that, I support that, and the same with her and getting to that place of not being defensive, or wanting to one-up the other person or be competitive. Going, ’You know what? We’re a much stronger force together than we are as one person, so why not be together on this?’”

The California native finds this tactic to be “much more powerful than just [one-on-one] against whoever.”

In September, the BH90210 star opened up about a similar problem he and Fox have encountered while parenting. “I’m much more the bad cop than she is, and at first, that sort of was an issue for us,” Green told Rachael Ray. “Now, we listen to each other and we talk to each other about things. If she doesn’t like something or I don’t, we listen to it. We coparent well, I think, right now.”

He and the Jennifer’s Body star tied the knot in 2010. Although Fox filed for divorce in August 2015, the pair reconciled by June 2016. She filed to dismiss the split in April.

The couple love teaching their little ones about sustainability and have partnered with Omaze to give away a new Tesla Model S Performance and $20,000 cash to those who enter at OMAZE.com. Funds raised will help Global Green’s local partners help put out fires in the Amazon and plant thousands of trees to combat deforestation.

“I kind of feel like it’s our responsibility as a platform to do the best we can,” Green explained to Us. “I know there are tons of problems at home here as well, but [this is] a major one. The Amazon is so important for life on this planet, for civilization and for people, so we want to help there as much as possible.”

With reporting by Carly Sloane