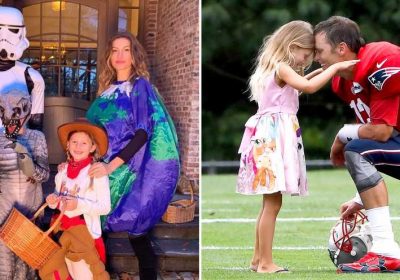 Brady’s bunch! Tom Brady and Gisele Bündchen started their family in 2009 and have been documenting their fun-filled lives with their kids ever since.

The couple, who were set up in 2006 on a blind date, welcomed their son, Benjamin, three years later. He became a big brother when Vivian was born in 2012.

The professional football player also shares son Jack with ex Bridget Moynahan. The little one arrived in 2007 after Brady and the Blue Bloods star had already broken up. The athlete was dating Bündchen at the time.

“I felt my world had been turned upside down [when I found out about Moynahan’s pregnancy],” the supermodel wrote in Lessons: My Path to a Meaningful Life in 2018, noting that Jack’s presence made her want to have children with the athlete “sooner rather than later.”

“Jack made my heart expand in ways I didn’t know [were] possible,” she gushed.

In February 2020, the Brazil native opened up about why she doesn’t like the word “stepmom” being used to describe her relationship with Jack. “I use the word bonus mom because I feel like it’s such a blessing in my life,” she said in an Instagram Story video at the time. “I feel so lucky that I got to have an extra, wonderful little angel in my life.”

Moynahan spoke fondly of her son’s blended family in 2011, telling More magazine at the time: “My son has two loving parents and an extended family, whether it’s cousins or stepmothers or boyfriends. My son is surrounded by love.”

Being a mom takes the New York native “outside of [her]self,” she exclusively told Us Weekly in April 2019. “When you’re a mom, you focus on what’s more important.”

Jack is the “sweetest big brother in the world” to his younger siblings, Bündchen captioned a 2015 family photo via Instagram. “Thank you for bringing so much joy into our lives,” the former Victoria’s Secret Angel captioned the little one’s birthday tribute at the time. “We love you so much peanut.”