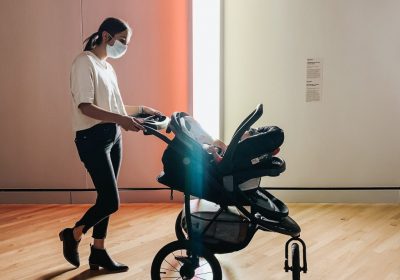 Nine-and-a-half times out of 10, I’m going to defend your crying toddler, your screaming baby, and your meltdown-having kid when out in public. All parents have been there — and we could all afford to show a little more grace to others going through it. Kids are people too, and they have every right to be in public spaces (including airplanes!). But sometimes (emphasis on sometimes), parents are a little too relaxed about their loud toddler while out and about. One man took it upon himself to complain — and Redditors reluctantly had his back after reading the whole story.

A man asked in the “Am I The A—hole?” subreddit if he was TA after “indirectly asking a woman to please try and quiet her crying toddler down?” My immediate first thought was yes, absolutely you are! But after reading it, his complaint actually holds some water.

“I was at a museum with a few friends today, and entered at the same time as 2 women pushing their kids in strollers,” he wrote. “As soon as everyone paid, we entered into the main exhibit area where her kid started non stop crying. Instead of trying to calm her toddler down, she simply continued her conversation with the other stroller mom over her crying kid. This continued on for about 5 minutes straight, with no end in sight.”

On the one hand, that is annoying (not to mention slightly distressing for the kid), but on the other, I have been there. I’ve been pushing a stroller with a screaming kid while others looked on because sometimes you just need a second to compose yourself before trying to calm them down again. Or maybe you just need to grab the last few items on your grocery list and check out so you can get your overtired toddler home.

But this situation seems different. Her kid is already this upset after having just arrived at the museum? It’s a little odd the mom is just carrying on like nothing is happening.

“Multiple people were looking in her direction, silently pleading for her to allow them to enjoy a quiet space they paid $20+ each to enjoy,” he continued. “I tried to walk ahead and ignore it, but around every corner her screeching kid was right there.” 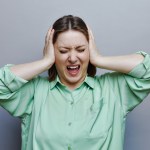 Being completely unbothered like this is strange. Wouldn’t she at least try to go to the restroom for a quiet moment? Or take him right back outside until he calms down? Museums are like libraries, so the screaming would be very obvious to everyone.

This man decided to take matters in his own hands, although, he did it in a polite way. “I finally walked back to the front, and asked the attendant if he could politely mention to her that her child was directly prohibiting everyone’s ability to enjoy their time,” he said. “I held back a few minutes, and then reentered. She must have guessed I was the culprit and proceeded to call me an a**hole for not being able to tolerate a crying kid.”

He went on, “I chose not to engage, and ignored her while she tried and failed to berate me. In my opinion if you aren’t even trying to quiet your kid down at a museum then you should go outside until they stop to be courteous to everyone else. Am I crazy?”

Surprisingly, I actually think he is in the right here, and Redditors thought so too.

“NTA. I have 2 kids and was all ready to come in here and call you TA, because yeah, there’s not a button you can push to make them stop crying,” one person wrote. “But there is a difference between being annoyed by a mother in line at CVS trying to soothe her ear infected kid while waiting for an antibiotic prescription (someone gave me a nasty look and I shot back ‘oh I’m sorry; is this bothering you? It’s super relaxing for me!’ in a snotty voice.) and a mother ignoring her crying child in a leisure setting like a museum, coffee shop, etc.”

The OP responded to this comment: “I would never shame a crying kid in any public setting like a store or hell even the zoo / Disneyland / a park. I just mind my business. But a little self awareness in a quiet museum goes a long way.”

“Nope, I’m completely with you,” the commenter said back. “Some people just think children shouldn’t like, exist in public (parks, public transportation, otherwise noisy family type restaurants) and those people annoy the shit out of me so I think they should be the ones to stay home. But if it’s a place where there is any expectation of quiet, leave your kid home, or if you do have to take them, remove them the minute they go higher than a reasonable level of volume.”

I totally agree. We teach our kids a trick: Listen to the noise environment when you walk in a place, and then match it. This doesn’t always work (especially during long shopping trips!), but in a situation like this, the mom could have absolutely left if her kid was disrupting everyone like this.

“This is so hard for me to say but NTA,” someone else wrote. “You are absolutely right, this is an optional excursion for the mother and a place where people can reasonably expect a relatively calm experience (if people were complaining about the naturally high pitched voices of normal kid conversation I would feel differently) it’s tough as a mum and sometimes ignoring a screaming tantrum really is the best option and people judge you for ‘doing nothing ‘ when it’s a calculated choice. But a museum is not the place. If your kid won’t stop, leave.”

Another pointed out: “Yeah, there’s a difference between a situation where parent has tried unsuccessfully to settle a kid, and one where the parent acts like they don’t have to parent.”

One parent said, “NTA. I am a parent. Being in a space meant for quiet contemplation is a tough thing to attempt with a toddler, and I can’t fault her for trying. But, I can absolutely fault her for having zero respect for the fact that she’s messing that general environment up for everyone else there with no attempt to address it. She wasn’t stuck on an airplane with a toddler having a meltdown, she was choosing to let her child scream endlessly in a museum she could temporarily walk out of at any time. Total AH.”

“To be honest, even if she was holding the child or trying any type of method I probably would’ve shut up and chalked it up to her kid having a bad day,” the OP responded. “But she literally was just talking over the crying kid to her friend. They could’ve walked outside and pushed the strollers on any number of walking paths at Balboa Park until it quieted down. After we were leaving, another staff said I wasn’t the first complaint, simply the one that caused them to intervene. Just wasn’t sure if it was my right to ‘go to the staff’. As I know crying kids are touchy subjects (99% of which I ignore as who am I to judge).”

Seriously, if you have to talk louder to your friend because your own child is screaming too loudly, it’s time to step back and re-evaluate your parenting decisions. I get needing a break from parenting every now and then, but that’s when a babysitter comes in — or a trip to the playground where your kids can run and scream to their heart’s desire. Next time, go on a moms’ date without the little ones, or simply show your kid (and others!) some kindness by at least trying to diffuse the situation before it gets uncomfortable for everyone. We fully support this man’s polite complaint. Even as a mom, I would be super annoyed, too!

Before you go, check out these unbelievable stories about Reddit’s worst dads.