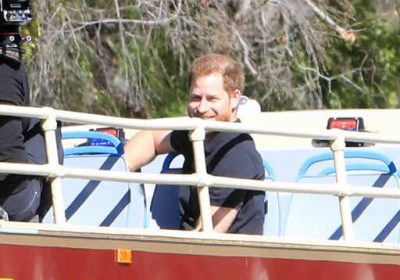 Prince Harry joined longtime friend James Corden for a rare one-on-one interview, not in Corden’s Range Rover, but on the top of a double-decker bus. There, he spilled the tea, both literally and figuratively on fatherhood, the British press, and Archie’s Christmas gift from his great-grandmother, the Queen.

If there’s one thing we love, it’s seeing Prince Harry happy, and we were not disappointed. While the pair tooled around L.A. seeing the sights, Harry beamed as he talked about Archie, his first child with Meghan Markle, who recently announced the couple is expecting a second baby later this year.

“My son is now over a year and a half, he is hysterical; he’s got the most amazing personality,” said the Duke of Sussex. “He’s already putting two, three words together. He’s already singing songs. … His first word was ‘crocodile.’ Three syllables!”

Harry sounds like every proud dad talking about his first-born, and we don’t blame him.

“It’s interesting, my grandmother [Queen Elizabeth] asked us what Archie wanted for Christmas, and Meg said a waffle maker,” Harry said. “So she sent us a waffle maker. For Archie.” And it’s been waffles for breakfast ever since, which is a-OK with both Harry and Archie.

“Meg makes up a beautiful organic mix, in the waffle maker, flip it, out it comes. He loves it… Archie wakes up in the morning and just goes, ‘Waffle?’”

In between pointing out celebrity homes and visiting the house featured in The Fresh Prince of Bel-Air, which Corden claimed would be the “coolest” place Harry and Meghan could live, they discussed what life was like for Harry and his family under the close, and frequently unfair, scrutiny of the British tabloid media.

“We all know what the British press can be like, and it was destroying my mental health,” said the Duke of Sussex. “I was like, this is toxic. So I did what any husband and what any father would do. I need to get my family out of here.”

Harry added that he never walked away from a life of public service, he and his family merely stepped back not down. “My life is always going to be about public service, and Meghan is signed up to that, and the two of us enjoy doing that,” he said. “Trying to bring some compassion, trying to make people happy, and trying to change the world in any small way that we can.”

If there’s any takeaway from this story, aside from the fact that Harry killed it on the Spartan obstacle course, it’s that he and Meghan put a priority on the mental health and well-being of their family, and we applaud them for taking care of one another and of Archie.

Add these beautiful books by Black authors and illustrators to your kids’ shelves.