Pregnant Shawn Johnson and Andrew East Are Already Thinking of Baby No. 3 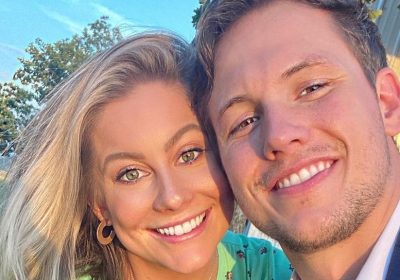 The bigger, the better! Pregnant Shawn Johnson East and Andrew East may be awaiting their second child — but they’re already thinking about expanding their family.

“We’re over halfway through [this pregnancy], and I could see myself doing it again,” the Olympian, 29, exclusively told Us Weekly on Wednesday, March 24, while promoting their H&R Block partnership.

The professional football player, also 29, chimed in, joking that he might want “20 kids” in the future. The athlete said, “I think it depends on [the sex] of this one. We shall see. But given how things are going with [our 16-month-old daughter], Drew, and how much fun it is, I would love to have more. I’m in the phase right now.”

The couple became parents in November 2019. They announced in January that Drew was going to be a big sister.

The toddler has “no idea” that her younger sibling is on the way, Shawn told Us on Wednesday. “We try to say, ‘There’s a baby in my belly.’”

Drew met her newborn cousin recently and was “so gentle” with the 1-week-old. “She went up to it and kind of pet his head and then gave him a little open mouth kiss on the head,” Andrew gushed. “It was so cute. So I think it’ll be awesome.”

As they await their infant, Shawn has been marveling at how “completely different” her pregnancy has been compared to the last.

“[It’s] weird,” the Winning Balance author told Us. “I don’t know if that’s just because life is so different [as a mom] that you’re eating different things, running around a hundred times faster than before.”

The former gymnast also popped faster this time around, telling Us, “The amount of people who are like, ‘Are you sure you guys aren’t having twins?’ And I’m like, ‘I’m not sure that’s actually a good thing to say. But yes, I, I feel eight months pregnant, but I am not.’”

Shawn isn’t suffering from any food aversions and is primarily craving carbs. “I want sugar,” the Iowa native explained. “I want bread, pasta, pancakes, everything. I think just because this time, [I’m] so exhausted.”

The Dancing With the Stars alum and Andrew wed in April 2016 in Tennessee, nine months after their engagement. Since their anniversary usually falls around the tax filing deadline, the couple remember their wedding guests talking about taxes at their ceremony. “I was like, ‘I don’t know what you’re talking about. Is this a bad sign?’” Shawn joked with Us.

She and her husband have recently teamed up with H&R Block’s chief tax officer, Kathy Pickering, to host “Tax Me a Question” Instagram Live videos. Their most recent session aired on Tuesday, March 23.

With reporting by Christina Garibaldi