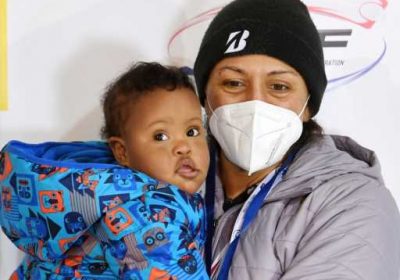 The Winter Olympics, for 2022, have been full of ups, downs, and more trials than other Olympians have faced in the past. Bobsledder Elana Meyers Taylor revealed how a positive COVID-19 test separated her and her toddler in ways she didn’t realize.

The two-time silver medalist and bronze medalist bobsledder has been to four Olympic Games, including this one. In an interview with USA Today, she revealed this Olympics “has been definitely the most challenging Olympics I’ve been to.”

After getting a positive COVID-19 test back after she arrived in Beijing, China after she was chosen as one of the Team USA flag-bearers. Since then, she’s had to isolate herself from her son Nico, 2, so much to the point that the nursing mama has had to send her breastmilk in a bottle to her son so he can feed. She’s included little handwritten notes to show her love for her boy, but Taylor has said how difficult it’s been to be away from him.

“Longest as I’ve been away from (Nico), before this incident, was nine hours, I think. At most.”

Her husband, Nic Taylor, an alternate for the men’s bobsled team, is also in Beijing with their toddler.

But in happier news, Taylor announced on Twitter on Feb. 9 that she and her family tested negative. She tweeted, “ALL NEGATIVE!!! My family is out of isolation tonight!!!!!”

Elana and Nic tied the knot back in 2014 and welcomed their son Nico back in 2020, who was soon diagnosed with down syndrome. She said in an interview with Team USA, “This is a whole new world for us. But I’m going to figure out how to do this and still be an elite-level bobsledder. For parents out there who have been given a prenatal diagnosis and are wondering if they can make it work, my goal is to show them that they can, even if they’re traveling around the world.” She added that the hardest part has been making sure Nico is okay, “So that’s been the hardest part: just making sure Nico’s okay, and he’s getting the help he needs.”