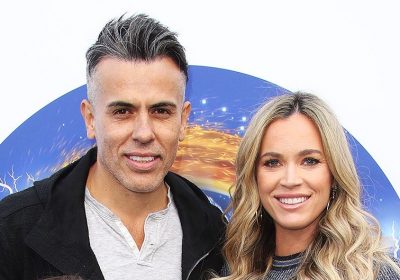 On the outs. Teddi Mellencamp opened up about how her kids reacted to her Real Housewives of Beverly Hills exit in September.

“My son, [Cruz], took it the worst,” the Bravo personality, 39, said of the 6-year-old on the Wednesday, November 4, episode of Nick Viall’s “The Viall Files” podcast. “My daughter [Slate] was thrilled because she was like, ‘That took up so much time, Mom, and it made you really stressed.’ And I was like, ‘Yeah, it did.’”

The Indiana native, who also shares daughter Dove, 8 months, with her husband, Edwin Aroryave, added that she found drama with the other cast members “hard to relate to” with so much going on in her family.

“My baby daughter had to have neurosurgery,” the accountability coach explained to the former Bachelor, 40. “My other daughter amputated a portion of her finger. I mean, it has been an insane year. When I was in the hospital with my daughter getting neurosurgery, my son fell off his bike and broke his thumb. It was unbelievably hard, so I think that maybe it was like me … not really in a position to go fight with women this year.”

Us Weekly confirmed in September that the “Teddi Tea Pod” podcast host would not be part of the Bravo show’s 11th season. “I recently found out that my contract as a Housewife is not being renewed,” Mellencamp explained on her Instagram Story at the time. “Of course, I could give you the standard response of ‘Oh, we both came to the decision that it would be best.’ Nah, I’m not gonna do that. That’s not who I am.”

John Mellencamp’s daughter went on to say that she was “sad” about the news, adding, “It feels like a breakup almost because you develop such strong relationships with the cast, with the crew, and you get to do incredible things that you probably never get to experience without, you know, the show. That being said, I’m really looking forward to the future.”

In August, Teddi urged her Instagram followers to stop cyberbullying her family after an episode of RHOBH. “I had so many comments on my last post saying they wish I was dead, wishing harmful things on my children,” she said in an Instagram video at the time. “That’s really where enough is enough. You guys tune in for drama, then enjoy the drama, but coming after people you do not know and wishing they died has got to stop.”

The fitness guru first appeared on the show in season 8 in 2017.