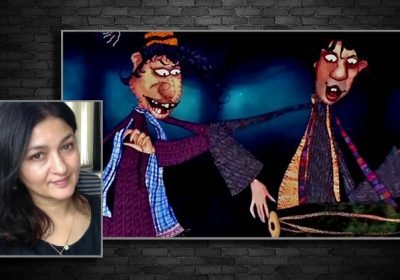 "…it leaves you with important lessons, which parents need to teach their children, especially in today's time where there is so much strife and hatred around us. Again, the whole landscape of the film addresses the imagination of the child, in terms of fun, fantasy and quirky characters."

With great life lessons weaved into a fantasy tale told in the simplest manner, Goopy Gyne Bagha Byne by Upendrakishore Ray Chowdhury, whose adaptation went on to become one of Satyajit Ray’s classic movies, is an interesting watch for kids. And now, your little one can also watch designer and filmmaker Shilpa Ranade’s animated movie Goopi Gawaiyaa Bagha Bajaiyaa based on the same story. Express Parenting spoke to Ranade to know about her inspiration behind the project. Here are excerpts from the conversation:

What prompted you to make an animated film on Goopy Gyne Bagha Byne?

I was illustrating a book which was a retelling of Goopy Gyne Bagha Byne by Gulzar. While I was doing it, I thought this will be real fun material for children. Since I am basically an animator, it naturally followed from the book for me. I decided to propose a film to CFSI (Children’s Film Society India) and see how to make a feature-length film out of the story.

Have you seen parents and children take enough interest in the movie?

Absolutely! We have got great reactions from people. We first took it all over the world via film festivals–Torronto, Dubai, Frankfurt, Trinidad, Korea, Indonesia, among other places–and it was great to get feedback from everywhere. People responded to the film whether or not they knew the language. So that was really heartening and led us to then release the film in India.

Also Read| Satyajit Ray: Introduce your child to the maestro through these films and books

Where can we watch the movie?

We released the film in the theatres. So that was really the platform to have watched the film. Now, the producers are looking at other platforms like the web.

How did the association with Karadi Tales happen?

The film’s music has been composed by Narayan Parasuram, creative director and co-founder, Karadi Tales. Since he was involved so closely with the making of this film–they are a children’s content company in any case–they thought it would be a good project to bring out. That’s how they got involved and released the film along with CFSI.

What kind of books and cinema did you enjoy as a child?

Growing up, we usually read classics, but not so much of Indian literature. But we did a lot of reading. Later, by the time I was 15-16, I started seeing a lot of world cinema and as part of that I got to watch Goopy Gyne Bagha Byne. Then I saw a lot of Satyajit Ray films. The Goopy-Bagha story really stayed with me. It has stayed in the public imagination.

What makes the Goopy-Bagha adventure relevant for kids today?

The film’s relevance lies in all these values built into it–anti-war, peace-loving, brotherhood–but is told in such a fun, non-didactic way. And yet, it leaves you with important lessons, which parents need to teach their children, especially in today’s time where there is so much strife and hatred around us. Again, the whole landscape of the film addresses the imagination of the child, in terms of fun, fantasy and quirky characters.