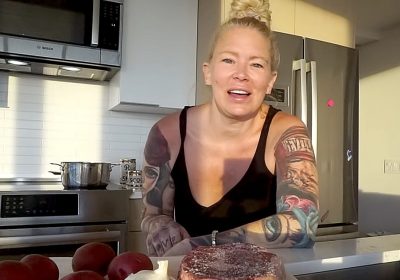 You might guess that someone who religiously follows the high-fat, low-carb keto diet knows their way around a steak. And Jenna Jameson — who famously lost 80-plus pounds on the celeb-loved ketogenic diet — proved that that adage is true on the third episode of her new YouTube Vlog, which she posted on Wednesday, October 16.

After shopping with her 2-year-old daughter, Batel, at Whole Foods and taking her swimming, Jameson dedicates the rest of the segment to showing viewers step-by-step the best way to cook a delicious steak without a grill. (Her choice: a bone-in ribeye.)

The former adult film actress, 45, is full of spot-on, surprising tips. The first one: The temperature of your piece of meat before you cook it is incredibly important. “What I like to do is, I take my steak out of the refrigerator, and I let it get to room temperature,” says the star. “I think that’s really important. Then I salt it, and I pepper it and I let it sit. Just room temperature. Let it come to exactly room temperature, then it’s perfect to cook.” She then emphasizes the importance of the technique: “If you cook a steak when it’s cold, it doesn’t get to the right temperature in the middle. So that’s one trick!”

Her next bit of wisdom is all about flavor — namely, you can almost never have too much seasoning. She uses kosher salt — “it’s nice and firm and it sticks well,” she notes — and makes sure to pat it on the top, bottom and around the sides, and also pepper. Then she has a secret ingredient: Lawry’s Garlic Salt, one of her keto must-haves. “I’m all about it, especially the one that’s coarse-ground with parsley — this one’s perfect for steak,” she says. “Don’t be shy either. Cuz here’s the thing, you have to gauge your seasoning according to the thickness of your piece of meat. So you want to season the hell out of a piece of meat that’s an inch-and-a-half thick [because] the middle’s not seasoned.”

The keto queen — who has shared great advice for following the diet on vacation — then waxes philosophical about flavors, saying she thinks it’s true that Americans don’t use spices as much as other cultures. She was surprised, she notes, when her husband, Israeli businessman Lior Bitton, first made a meal for her with more seasoning than she’d had previously. But “once you get used to it,” notes Jameson, “seasonings are life. They are life. Season your sh–t, OK?” The bestselling author then jokes with her audience: “Am I gonna get demonetized for saying that?” she muses. “I don’t know, I don’t know, but whatever! Bottom line is, Bam!”

Scroll through to get Jameson’s complete step-by-step guide on how to cook a steak to your perfect temperature. Though be warned, a fan of medium rare, Jameson jokes, “If you cook your steak until it’s black, I don’t know you!”