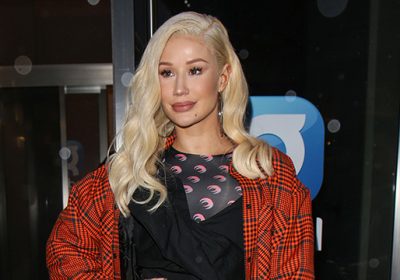 After managing to keep her pregnancy a secret for nine months, Iggy Azalea has decided not to keep mum on her new baby boy’s name for quite so long. The Australian rapper took to Instagram on Tuesday to reveal the name she and boyfriend Playboi Carti have given their son, who was born in June. We have to say, it’s rather a perfect choice.

“Amethyst & Onyx,” reads the text on an audio recording Azalea posted. Side note: If you’re at all having a tough day, you need to put your sound up and listen to this kid’s happy gurgling ASAP, because it is a delight.

In case you’re not up on your Iggy Azalea facts, Amethyst Amelia Kelly is her given name — and we’ve always thought it amusing that she had a great artist’s name in the first place before choosing “Iggy.” But maybe she likes to keep Amethyst for her personal life, especially now that she’s pairing it with Onyx, her son.

Onyx is a form of the mineral chalcedony. It is often all black or black with white parallel bands, but it can also be other colors, such as red. According to BabyNames.com, the word onyx is ancient Greek and means “nail” or “claw.”

Those who believe in crystal powers say that onyx is a protective stone that blocks or transforms negative energy. We have no idea if Azalea is into that line of thinking, but that’s an interesting way to view one’s child — or maybe the name is meant as way to keep her baby safe. As a new mom, she is understandably protective of her baby boy.

“I have a son,” she wrote in an Instagram Story last month. “I kept waiting for the right time to say something but it feels like the more time passes the more I realize I’m always going to feel anxious to share news that giant with the world. I want to make his life private, but wanted to make it clear he is not a secret and I love him beyond words.”

Congratulations, again, to the new parents. And now we’re going to go back for another hit of that baby gurgle. It’s just so good.

Here are some of the other unique celebrity baby names we love.