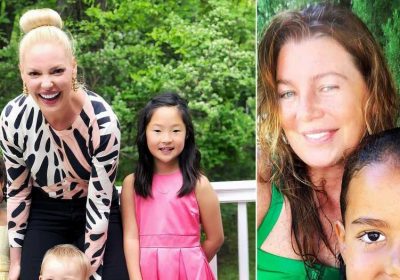 Grey’s Anatomy gang! Caterina Scorsone and more cast members of the ABC show have been raising families off camera.

The actress became a mom in 2012 when her daughter Eliza was born, followed by Pippa and Lucinda in 2016 and 2019, respectively.

While quarantining at home with her and then-husband Rob Giles‘ little ones amid the coronavirus pandemic, the Canada native posted a picture of Eliza following in her TV character Amelia Shepherd’s footsteps.

“Well, Grey’s Anatomy might be in quarantine but that doesn’t mean the surgeries have stopped at our house. #teddybearcare,” Scorsone wrote alongside an April 2020 shot of her eldest stitching up a stuffed animal. Eliza even gave the bear a breathing tube while it was under the knife.

Us Weekly confirmed the following month that the Private Practice alum and Giles had called it quits after 10 years of marriage, and the estranged couple now coparent.

Scorsone’s character was briefly married to Owen Hunt, played by Kevin McKidd, on Grey’s Anatomy, and her former TV husband has four children of his own.

The English star shares a son named Joseph and daughter named Iona with his ex-wife, Jane Parker. He wed Arielle Goldrath in March 2018, and the chef went on to give birth to son Aiden and daughter Nava.

McKidd’s two eldest children are great influences on their younger siblings, he wrote via Instagram in July 2019. “Joe and Iona are the best guiding lights to these new souls. Arielle is a WARRIOR and I’m so proud to witness her natural mothering strength and wisdom. Full of love and gratitude.”

The actor’s costars congratulated him and Goldrath on their youngest child’s arrival. “Kev!!! She’s here!!! Congrats to you and Arielle!!!” Kelly McCreary, who portrays Maggie Pierce, wrote, while Jake Borelli, who plays Levi Schmitt, commented, “This. Warms. My. Heart. Congrats Kev!”

The show’s creator, Shonda Rhimes, shared her love as well, writing, “CONGRATULATIONS. All the love to you and your family!”