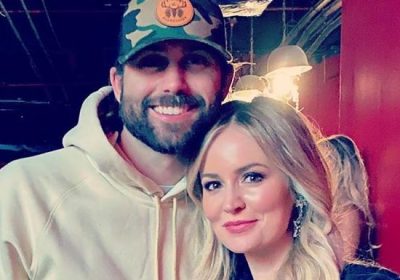 Emily Maynard and husband Tyler Johnson welcomed their fourth child, and her fifth kid, one day after the Bachelorette alum revealed that she was pregnant.

“Baby #5 ….oh heavenly day…” the former reality TV star, 34, captioned an Instagram video on Saturday, October 17, showing her in the hospital as she prepared to give birth.

“Is that a girl?” Johnson asked in the delivery room as the baby was born.

“Oh, my gosh,” Maynard said as a nurse declared that the newborn looked “like her daddy.”

Former ‘Bachelor’ and ‘Bachelorette’ Winners: Where Are They Now?

The video ended with the baby snuggling in her mother’s arms after Maynard wiped a tear from her eye.

Johnson shared a similar video on his Instagram account of the couple arriving at the hospital ahead of the little girl’s arrival. “You’re so beautiful,” he told his wife as she lay in bed, hooked up to a fetal heart monitor. “This baby is really kicking,” Maynard said before delivering her second daughter, who weighed 6 pounds, 11 ounces. “She looks just like Gatlin,” Johnson said, referring to their youngest son.

The former Bachelorette, 34, revealed on Friday, October 16, that she was expecting the couple’s fourth child. The West Virginia native has an older daughter, Ricki, whose father, Maynard’s then-fiance Ricky Hendrick, died in an airplane crash before his daughter was born.

instead of packing the daily 1823 lunches, I’d rather post pictures of my family on instagram and wish it was still summer.

The I Said Yes author, who got engaged to Brad Womack on the 15th season of The Bachelor, went on to star as the Bachelorette in 2012, getting engaged to Jef Holm. The couple split that October.

These ‘Bachelor’ and ‘Bachelorette’ Babies Will Melt Your Heart

She got engaged to Johnson in January 2014 after initially meeting a few months before she started filming her season of The Bachelorette, which she said he “never watched.” They reconnected after Maynard and Holm ended their engagement.

Maynard wed the management consultant in June 2014 in a secret wedding ceremony at Johnson’s parents’ farm in South Carolina. In addition to their Ricki and their newborn, the couple share three boys Jennings, 5, Gibson, 4, and Gatlin, 2.