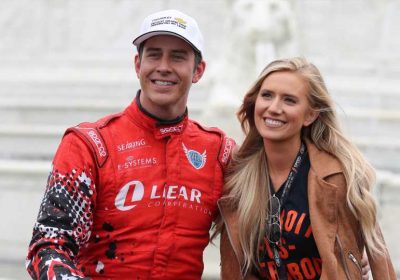 Arie Luyendyk Jr. couldn’t help boasting about his wife, Lauren Burnham, and her post-partum figure on Instagram on July 25, sending the internet into a tizzy.

While many responded with compliments on Burnham’s body — clad in a bright, booty-baring thong bikini in the pic — others were irritated by the gesture and felt that Luyendyk’s objectification of his wife’s post-partum figure was completely unnecessary.

The couple welcomed their daughter, Alessi, eight weeks ago. The photo shows Burnham snuggling the baby to her cheek, but it wasn’t that cheek that the internet was focused on.

Proud of you @laurenluyendyk, hottest momma around ?#8weeks

Luyendyk Jr. captioned the shot, “Proud of you @laurenluyendyk, hottest momma around… #8weeks.”

He’s proud of her… for being the hottest momma around. Not because she squeezed Alessi out of a space smaller than a sesame bagel, but because of her booty-popping, hot-momma, social-media swagger. Sigh.

Unfortunately, he also commented in the comment thread, “Annnnd she may kill me for posting this,” which seems to indicate he didn’t obtain her consent before sharing the photo with, oh, the entire world. Yuck.

Some followers were not happy, which isn’t new for the Luyendyks.

“That’s not love… that should be for you and not the world,” wrote one.

“This seems insane to post! Way to publicly sexually objectify your child’s mother? Lauren looks great, I’m not shaming her, but this post feels sleazy. Super disappointing!” said another.

“Completely unacceptable picture” and “She looks great but I don’t know if I’d want a bunch of pervs staring at my wife’s butt.” Well, okey-dokey, then.

How about this pic of the whole fam? Surely this one’s okay, right? NOPE.

First hike with @alessiluyendyk ❤️ We kept it short but it was so fun to have her in the carrier for the first time ?. Thanks for the ? @liz_k_fisch

Commenters got all up in the Luyendyks’ grill for, well — here’s a sample of the sanctimommy responses (from which Arie’s defended his wife before)

“Insane! Exposing a infant to potentially get bitten by a infested mosquito or God knows what, can’t you find a babysitter or put your own desires in the back burner until she is a few months older? Selfishness!”

Welp. The internet has spoken. It may be time to just hush up for a while, Arie, m’kay? Step away from the social media, go swat some malaria-infested mosquitos away from your daughter’s cranium, and keep the booty pics of your wife on the down low. Just our professional opinion.