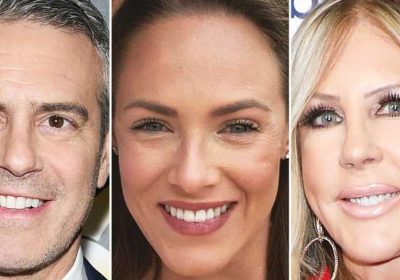 Heartbroken. Andy Cohen, Vicki Gunvalson and more stars sent their thoughts and prayers to Real Housewives of Orange County‘s Kara Keough and husband Kyle Bosworth after they announced the loss of their baby boy.

“On April 6th, our son McCoy Casey Bosworth was born at 3:10 a.m.,” the 31-year-old Bravo alum revealed via an emotional Instagram post on Tuesday, April 14. “Weighing in at 11 pounds and 4 ounces and spanning 21 inches, McCoy surprised us all with his size and strength (and overall perfection). During the course of his birth, he experienced shoulder dystocia and a compressed umbilical cord. He joined our Heavenly Father and will live forever in the hearts of his loving parents, his adoring sister, and those that received his life-saving gifts.”

Jeana Keough‘s daughter went on to explain that her family decided to donate their little one’s organs so that he could help “others find new hope and profound healing” in their time of need. “May his legacy shine in the form of lifetimes aplenty — lives filled with laughter, compassion, energy, love, and most of all gratitude,” Kara added. “May it be said that McCoy Casey Bosworth left this world in a better place, for a better place … that he made an impact … that he was an answered prayer … that he was a hero.”

Kara’s Bravo family flooded the comments section with their condolences soon after hearing the heartbreaking news. Cohen, 51, told Kara that he was “sending love and prayers to your family” and Tamra Judge said her “heart hurts” for Kara and her husband. Judge, 52, and Jeana, 64, haven’t been on good terms since the real estate agent supported the CUT Fitness CEO’s ex-husband Simon Barney during their divorce, but Judge put her history with Kara’s mother aside and sent all of her love.

The former reality star and Bosworth, 33, tied the knot in February 2014 and welcomed their daughter, Decker, two years later. In October 2019, they announced that they were expecting their second child together after a three-week vacation in Europe. “As it turns out, our little Eurotrip left our hearts, our bellies, AND my uterus quite full,” Kara wrote at the time.

Scroll down to see how celebs reacted to Kara’s devastating loss.