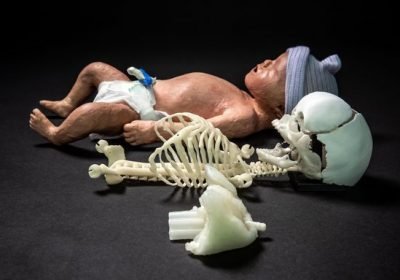 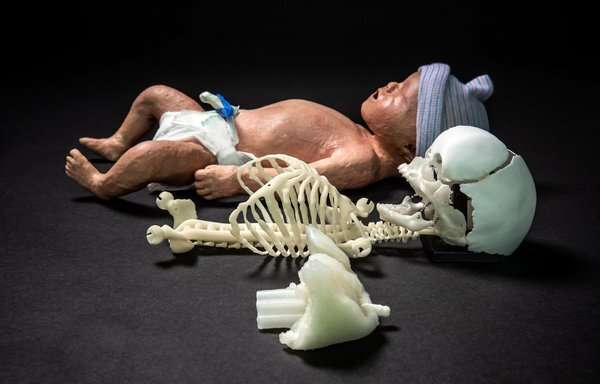 TU/e researcher Mark Thielen (Industrial Design) developed a 3-D printed baby dummy, based on an MRI scan of a real newborn baby, which could improve the training of the reanimation procedure.

Two millions: This is, worldwide, the number of babies which suffer suffocation during birth every year. A resuscitation procedure is sometimes the key to avert irreparable damages for the baby. And, for successful outcomes, promptness of action and preparation are vital. TU/e researcher Mark Thielen (Industrial Design) developed a 3-D printed baby dummy, based on an MRI scan of a real newborn baby. The manikin is made of 3-D printed organs and chest bones, and a mock circulatory system. For the neonatologists of the Maxima MC of Veldhoven, the manikin offers a much more realistic feeling during the training of the resuscitation procedure than previously used ones, and, as an added value, the real-time monitoring of vital signals such as blood pressure and heart rate during resuscitation.

Each year, worldwide, approximately one million babies die during birth due to due to a shortage of oxygen that occurs during birth. Additionally, one million babies suffer consequences which vary, depending on the duration of oxygen deprivation, from minor neurological abnormalities to, unfortunately, irreparable brain damage. Direct resuscitation—opening the airway, ventilating the lungs and performing chest compressions—can minimize the consequences of suffocation through birth.

Neonatologists, gynecologists and midwives are currently training these skills on resuscitation manikins. Although the manikins should be replacements for the real child, there is little resemblance on the inside. “They have a purely mechanical design, which is optimized for massive production: cheap and indestructible,” explains Thielen. And, a mechanical internal construction, with squeaking springs and plastic plates, is surely not how humans are biologically composed. “When doctors practice using these manikins,” he wonders, ‘do they actually learn the right feeling? And, without measuring blood and air flow, can we determine the quality of the training?”

Newborn from the printer

For his Ph.D. project, Thielen designed and built a new resuscitation manikin, based on an MRI scan of a full-term infant. Using a 3-D printer he made replicas of the bone structure—consisting of strong, flexible plastics—and molds of the heart, lungs, muscle, fat and skin tissue, in various soft silicone types. The entire manikin was printed down to the last detail.

“Three-dimensionally printing the rib cage was a real challenge, an enormous effort that required months of work,” says Thielen. “I spent hours and hours identifying the borders of every single bone in the MRI images, slice by slice. Often, having the images analyzed automatically by an image software gave unsatisfactory results, so I had to restart from scratch and do everything manually.” A lot of attention was also paid to the 3-D printing of the heart, a model consisting of four internal spaces with even four heart valves.

The new design incorporates a variety of sensors to measure the quality of resuscitation. For example, the jaw contains position sensors to monitor the opening of the airway, while blood pressure and flow sensors have been placed in the heart to measure the effectiveness and quality of the cardiac massage. The final integration of the artificial vascular system into the manikin still requires further miniaturization of the circulation system.

The resistance and flexibility of the heart and rib cage are measured in the new manikin and compared to real babies and rabbits, which are comparable in anatomy and size. For Sidarto Bambang Oetomo, pediatrician in neonatology specialized in innovations for premature babies who has for long worked at the Maxima MC of Veldhoven and as a part-time professor at TU/e, the new manikin is a big step towards realistic behavior, which can ‘improve the quality of the resuscitation training.” “When manikins look like dolls,” he explains, ‘the trainees can be easily distracted and lose their concentration, rendering the training less efficient.” Doctors and nurses from Maxima MC who participated in a sensory study also indicated that the realistic sensory value during the resuscitation of the new manikin was much higher than with current manikins.

For the smallest, deserving the biggest chance