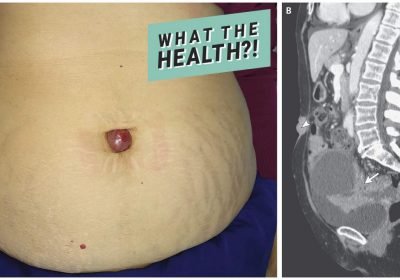 What would you do if you discovered a weird red bubble growing in your belly button? If your answer is “seek medical attention immediately,” you’ve definitely got the right idea. Because as a new report in the New England Journal of Medicine shows, that kind of symptom can be a sign of cancer that needs to be treated ASAP.

The article, published as part of NEJM‘s Images in Clinical Medicine series, tells the story of a 73-year-old Spanish woman who went to the emergency department because of a “painful umbilical nodule that had been enlarging over the past four months.” In the two days prior, a bloody substance had begun seeping from the two-centimeter red lump, causing her serious alarm.

When doctors examined the woman, they discovered something else: They could feel a “palpable pelvic mass” under the surface of her abdomen—and quickly ordered a CT scan. The scan showed an 11- by 11- by 9.5-centimeter cancerous tumor, and a biopsy revealed a diagnosis of high-grade serous ovarian cancer—the most aggressive type of ovarian cancer.

The belly button nodule, it turns out, was a clue that cancer was spreading inside of her—a tip of the iceberg of sorts. It’s called a Sister Mary Joseph’s nodule, and it’s named for a nun (and surgical assistant) who first noted the connection between this symptom and malignant cancers back in 1864.

Sister Mary Joseph’s nodules are rare these days, since they usually only occur when cancers are very advanced. Plus, only an estimated 1 to 3% of abdominal or pelvic cancers actually spread to the umbilical region and manifest as this type of nodule in the first place. But they do show up in case studies now and then.

When these nodules do occur, they’re usually linked to gastrointestinal or urinary tract cancers, but they’ve also been reported in cases of lung, pancreas, gallbladder, breast, kidney, penis, prostate, and testicular cancer. In about 30% of patients who develop a Sister Mary Joseph’s nodule, doctors aren’t able to identify the primary source of the cancer.

The patient in this case report underwent surgery to reduce her tumor and received chemotherapy. The report doesn’t note how she fared after that, but generally, this diagnosis “may carry a poor prognosis,” according to Stanford Medicine, since the patient’s cancer has usually spread to several organs.

Ovarian cancer is infamously difficult to diagnose early, which is one reason it’s so deadly. But this can serve as a reminder that women should know the facts about ovarian cancer, including any risk factors they may have and any strange symptoms—like persistent abdominal pain or swelling, fatigue, painful sex, or constipation—that may be red flags.

And, of course, any new bumps, growths, or bruises that won’t go away should be looked at by a doctor as well. Often, these are harmless and easily treatable conditions (like a keloid or a navel stone), but it’s always better to be safe than sorry.