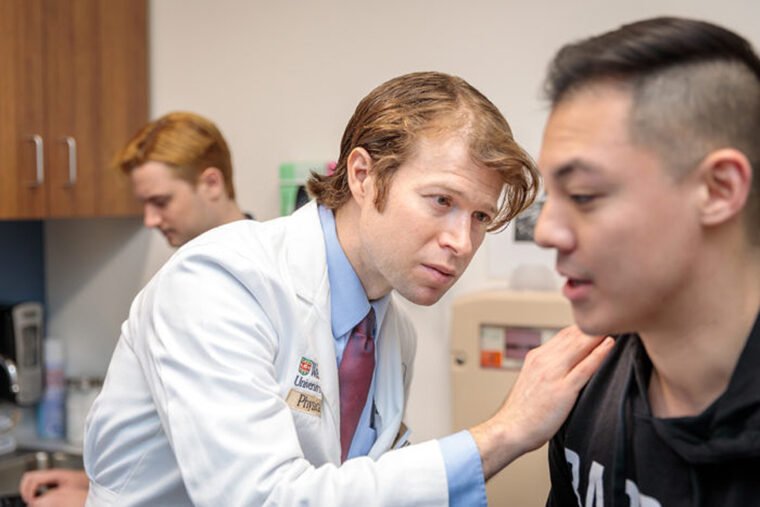 Isotretinoin, a form of vitamin A, has been prescribed to treat acne for decades. It reduces oil production in the skin, which helps prevent acne from forming.

But new research from Washington University School of Medicine in St. Louis has uncovered a previously unknown benefit of the medication. It shifts the skin microbiome of acne patients to more closely resemble that of people with normal skin. The new study is published Dec. 21 in the Journal of Investigative Dermatology.

The study sheds light on how isotretinoin works and provides information that could lead to developing microbiome-based acne treatments, according to the lead researchers, Makedonka Mitreva, associate professor of medicine; and William H. McCoy, MD, PhD, an instructor in medicine, and their colleagues. There is a need for such alternatives because isotretinoin—while effective—causes severe birth defects, so doctors must take added precautions for women of child-bearing age.

Doctors often prescribe antibiotics that target bacteria called Cutibacterium acnes — also called Propionibacterium acnes — which is associated with acne. But such antibiotics can contribute to the development of resistant strains of bacteria and can kill off potentially beneficial microbes as well. Isotretinoin is not an antibiotic. It is largely thought to treat acne by drying out the skin, making it a less inviting place for acne-causing and acne-promoting microbes to flourish. It is the only therapy that can reliably clear acne long term.

“There are greasy areas of the skin that support the growth of certain communities of bacteria, and we know that some of them appear to be associated with acne,” said McCoy, a dermatologist and the study’s first author. “We asked whether we would see fewer of those bad bacteria on the skin after isotretinoin treatment, and we did. But we also know that this drug doesn’t work on the bacteria themselves. It changes the patient’s skin. So if the microbes are changing, it’s in response to changes in the patient’s skin. The drug appears to make the skin less hospitable to acne-causing bacteria.”

The researchers studied bacteria sampled from facial skin swabs at four time points over the course of the 10-month study. The samples came from 17 patients whose acne was treated with isotretinoin and, as a comparison, eight untreated subjects. Of these eight, four had normal skin and four had acne. The researchers found that isotretinoin therapy increased the diversity of microbes found on the skin. Through DNA sequencing, the researchers also identified four types of bacteria that bloomed with isotretinoin treatment. None had previously been associated with improved acne.

Isotretinoin also reduced the overall number of Propionibacteriumbacteria, even as the treatment increased the diversity of the individual types of this bacteria. The 38 percent of isotretinoin-treated patients who did not show this beneficial pattern in the Propionibacterium communities is similar to the proportion of isotretinoin-treated patients in other studies who ended up needing additional rounds of therapy.

The study’s findings, according to the researchers, suggest that isotretinoin creates a “bottleneck” that selects for beneficial communities of Propionibacteria and other bacteria that appear to be healthy, creating a skin microbial community that reduces the chances of the acne returning, even when normal oil production returns to the skin after treatment stops.

“When you have a bottleneck, you create an opening for other microbes to move in and increase in abundance,” said Mitreva, the study’s senior author and an assistant director of the McDonnell Genome Institute at Washington University School of Medicine. “We see this happening here. After the treatment, the microbial communities shift to a mix of populations that appears to be healthier, and that shift persists months after the treatment.”

The researchers said it’s important to understand how isotretinoin works, in an effort to create new therapies that might be more effective or have fewer side effects. Since isotretinoin is known for causing birth defects, it should not be prescribed to women who are pregnant or trying to become pregnant. Women of reproductive age who take isotretinoin are prescribed birth control for the same reason.