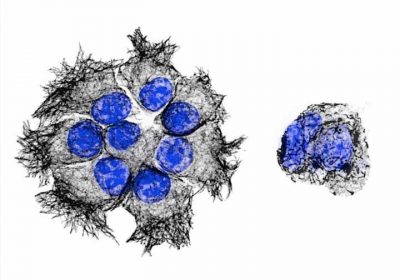 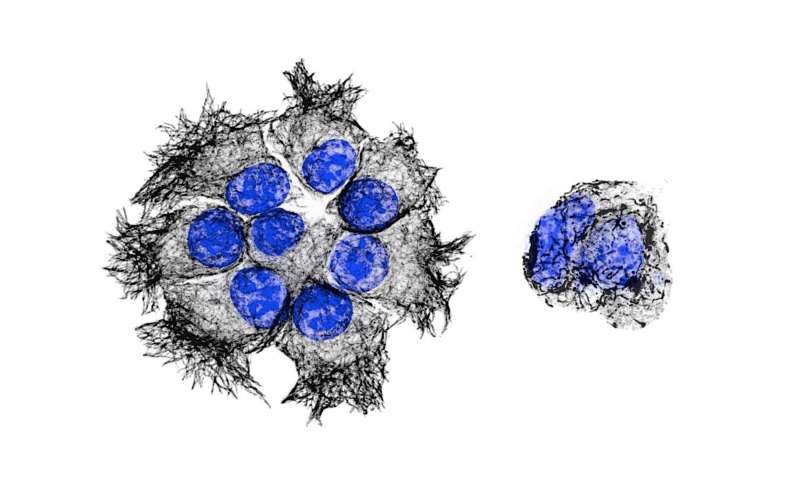 Unlike many other cancers, most pancreatic tumors are rock hard.

“That’s one reason why pancreatic cancer is one of the most lethal types of cancer,” says Kenneth Olive, Ph.D., associate professor of medicine and pathology & cell biology at Columbia University Vagelos College of Physicians and Surgeons and a pancreatic cancer researcher at the Herbert Irving Comprehensive Cancer Center.

“Pancreatic tumors recruit a thick layer of connective tissue called stroma that hardens the tumor and acts like a shield,” says Olive, whose previous research first uncovered how the stroma makes it difficult for chemotherapy drugs to reach malignant cells. “As a result, most chemotherapy drugs can’t build up to the levels needed to be effective.”

To Olive, that suggests, paradoxically, a longer-lived—but less toxic—drug may work better.

“For a pancreatic cancer drug to be effective, it needs to stick around long enough to seep past the stroma and accumulate in the tumor. But if it is going to persist for a long time in the blood, it can’t be as toxic to the rest of the body,” he says.

Olive’s latest research, which was led by Jaime Eberle-Singh, Ph.D., while she was a graduate student at Columbia, may have identified a good candidate. The drug, an experimental compound called PTC596 that had shown antitumor activity in mouse and human pancreatic cancer cells, seemed to have the right qualities: PTC596 has a durable half-life (most cancer drugs have a half-life of a few minutes to hours) and can evade a pump that many cancer cells use to expel drugs. “This means that any amount of drug that makes it past the barrier can target the malignant cells,” says Olive.

Based on those studies, Olive, Eberle-Singh, and their collaborators tested PTC596 in combination with gemcitabine (a first-line drug for pancreatic cancer) in genetically engineered mice with an aggressive form of pancreatic cancer that is generally resistant to chemotherapy.

The mice that were treated with the two-drug combination lived three times longer than those treated with only a single standard agent. “This result was exciting because it’s exceedingly rare for any treatment to extend survival in this gold-standard mouse model,” Olive says.

“Based on the drug’s safety profile and our own findings, there’s a good rationale for testing PTC596 in combination with standard therapy in patients with pancreatic cancer,” says Olive.

Olive’s team also discovered that PTC596 blocks the formation of microtubules—a network of proteins involved in cell division and transport of nutrients within the cell. He demonstrated that PTC596 may act synergistically with nab-paclitaxel, another microtubule-binding agent.