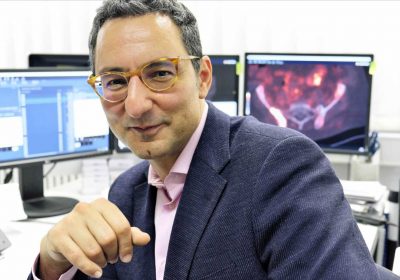 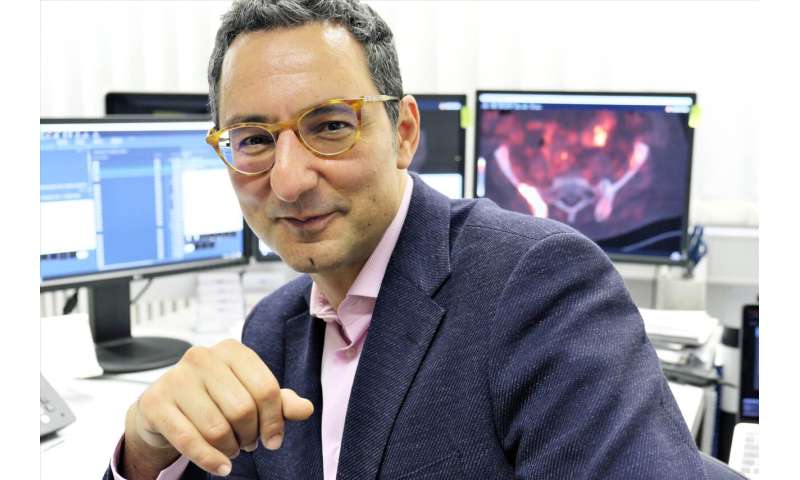 Prostate cancer accounts for 26 percent of male cancer cases diagnosed in Germany, making it the most common form of malignant tumor in men. If the cancer becomes metastatic, it is not unlikely that it will prove fatal in the generally elderly patients. Scientists and doctors at Saarland University Hospital recently conducted a clinical trial in which they established the effectiveness of a therapeutic method that is successful in controlling late-stage prostate tumors and their metastases without causing serious side effects. The novel element in their approach involves combining two radioactive substances that are able to destroy the tumor cells by very precisely irradiating them at very short (millimeter or micrometer) range. As a result, a patient’s life expectancy can be extended without any substantial impairment in quality of life. The pilot study, which was led by nuclear radiologist Professor Samer Ezziddin, has been published in the European Journal of Nuclear Medicine and Molecular Imaging.

Reports of new cancer treatments often raise high hopes and expectations, particularly among cancer patients and their families. But raising expectations is not something that Samer Ezziddin, Professor of Nuclear Medicine and Director of the Department of Nuclear Medicine at Saarland University Hospital is keen to do. “In most cases, we cannot heal the patients who take part in our therapeutic program. Our aim is to extend life expectancy by a number of months or even years without impairing the patients’ quality of life,” he says.

Over the course of his career, he has seen patients whose cancer has regressed completely despite extremely poor prognoses, but such cases remain the exception and should be regarded as “statistical outliers” rather than miracle cures. The battle to treat the many varieties of cancer continues to be challenging, involving careful but laborious work, where progress is measured in small steps and where significant advancements only become apparent after an extended period of time.

The current study from the team of nuclear radiologists in Saarland is also a small step, but one that could be decisive for future therapeutic approaches. The physicians subjected patients with advanced prostate cancer to a radiation therapy regimen that was originally developed in Heidelberg and that has now been developed further by the team in Saarland. The approach is known as targeted radionuclide therapy. Via intravenous drip, a radioactive drug is continuously fed to the tumor site where the radioactive substance (the radionuclide) irradiates the tumor internally, thus destroying the tumor cells.

But rather than injecting just one type of radioactive drug into the tumor, the medical research team in Saarland chose to combine two radiopharmaceuticals, each having a different irradiation path length. One of the radionuclides used was lutetium-177. This radioactive material has an effective range of 0.5 to 10 millimeters, which is the distance over which the surrounding tissue is destroyed. It is highly precise, because the radionuclide is attached to a cell-targeting molecule that only binds to receptor sites almost exclusively located on the surface of prostate tumors, leaving other healthy body cells unaffected. However, even the very short distance over which lutetium-177 is effective may be too great when treating the tiniest tumor that can form when the cancer spreads to other parts of the body. The research team led by Professor Ezziddin therefore decided to add a second radioactive nuclide, actinium-225, to their therapy regimen. Samer Ezziddin explains the benefits as follows: “Actinium-225 delivers excellent results; its effective path length is well down in the sub-millimeter range.”

By including actinium-225 as a therapeutic agent even the smallest of tumors, in principle, even individual tumor cells can be irradiated internally once the radioactive substance has infiltrated the cancer cell via the receptor site. “Because the effective path length of actinium-225 is only three to four cell diameters, surrounding tissue is not destroyed,” explains Professor Ezziddin.

However, previous radionuclide therapies based on actinium-225 suffered from one crucial disadvantage. The patient’s salivary glands can also take up the radionuclide, causing decreased function of the glands and resulting in extreme dryness in the mouth, which can significantly reduce the patient’s quality of life.

The paper just published describes the results of a pilot study that examined the effectiveness of the tandem therapy proposed by the research team from Saarland University Hospital. The study was able to demonstrate that these side effects no longer occur when lutetium and actinium are combined in a specific therapy regimen. “Lutetium is very well tolerated for most sizes of tumor,” explains Professor Ezziddin. “This allowed us to significantly reduce the actinium dosage level, so that our tandem therapy can be carried out with very few side effects.”