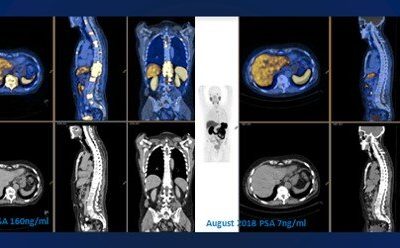 A novel therapy using two targeted treatments for prostate cancer has been shown to maximize efficacy while reducing side effects according to research presented at the Society of Nuclear Medicine and Molecular Imaging (SNMMI) 2019 Annual Meeting.

Although there have been great treatment advances, metastatic castrate resistant prostate cancer (mCRPC) remains a deadly disease. Trials with the targeted radionuclide therapy 177Lu PSMA 617 have proven safe and effective in some men; however, not all respond to treatment, and responses may be limited in duration. To build upon these trials, researchers paired 177Lu PSMA 617 with the tumor-specific radiation sensitizer idronoxil (NOX66) to assess responses in patients with heavily treated mCRPC.

“The initial results of this phase I dose escalation study show that the combination targeted treatments were well tolerated together, with no increase in toxicity from 177Lu PSMA 617, and an apparent high efficacy in men who have already had extensive treatments,” said Louise Emmett, MD, associate professor at the University of New South Wales in Sydney, Australia.