Multi-center study: Improving doctor-patient communication at the end of life 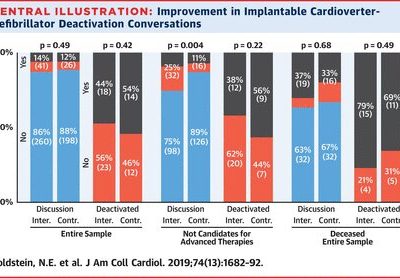 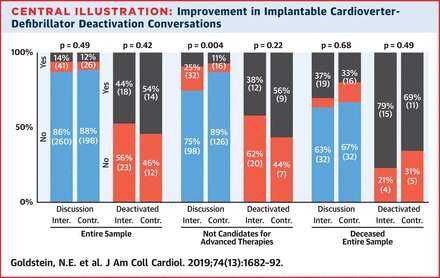 It’s one of the most difficult conversations a doctor will have with a patient: whether and when to turn off the life-saving device that has kept their heart beating. To find out whether an intervention could increase the number of discussions between clinicians and patients with heart failure about the kinds of treatments they would want at the end of their lives, also known as advance care planning, researchers at The Mount Sinai Hospital developed a rigorous six-center study to investigate a novel communication intervention. The study appears in the Journal of the American College of Cardiology.

The doctors developed an educational intervention in the form of a 90-minute training session that focused on advance care planning and the steps involved in deactivation, in addition to teaching standardized communication techniques such as asking open-ended questions and responding to patients’ emotions during a conversation about serious illness. The results showed the intervention improved clinician communication and what clinicians spoke to their patients about.

Each year, an estimated 100,000 people get an implantable cardioverter defibrillator (ICD), a device implanted in a patient’s chest to constantly monitor the heart and deliver electric impulses to correct a potentially lethal heart rhythm. Multiple studies have demonstrated that conversations about turning off the shocking function at the end of life rarely take place, and thus many patients are shocked by their device as they are dying, a situation that can be painful for patients and upsetting for their families.

“This is the first study that we know of to demonstrate that we can change cardiologist behavior in terms of the ways they speak to patients with advanced heart disease, which represents millions of patients, a number that is sure to grow as patients live longer lives,” says Principal Investigator and lead author Nathan Goldstein MD, Professor, Geriatrics and Palliative Care, Icahn School of Medicine at Mount Sinai. “It is an awful thing for a patient to experience shocks when they’re dying. Patients don’t realize that we can easily deactivate the device and clinicians find it difficult to bring up the option. It’s tough to talk to a patient about turning off something that they’ve come to trust may save their lives,” adds Dr. Goldstein.

To evaluate new communication techniques to address this problem, Dr. Goldstein first developed the training session, to be supported with an automated electronic medical record reminder system. Then, he identified hospitals across the country to participate in the trial, known as WISDOM, a six-center study in which clinicians at three hospitals would receive the special education and three would not.

The study, conducted from September 2011 to February 2016, and funded by the National Heart, Lung and Blood Institute, included 525 subjects with advanced heart failure who had an ICD, 301 of whom were at intervention hospitals and the remaining 224 at control hospitals.

Among the overall sample of patients, discussions about deactivation were not changed in a statistically significant way (14 percent of patients in the intervention versus 12 percent in the control). However, among the subgroup of patients who were not candidates for advanced cardiac therapies such as cardiac transplant or placement of a ventricular assist device, the number of conversations about ICD deactivation doubled among patients in the intervention group (25 percent) versus those in the control group (11 percent).

In a secondary outcome, intervention patients were more likely to have goals of care conversations as compared to patients in the control group (50 percent versus 37 percent). Goals of care refers to the wishes that patients have for the outcomes they want from their medical care, as opposed to referring solely to the individual treatments. By understanding patients’ wishes and desires for treatments, clinicians can help patients make more informed choices about their medical care. This can include things such as whether to remain in hospital or receive care in the home, if this is an option. In this context, goals of care conversations might include the question of when and if to deactivate the device that has kept the patient alive.