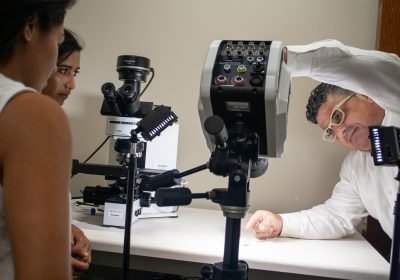 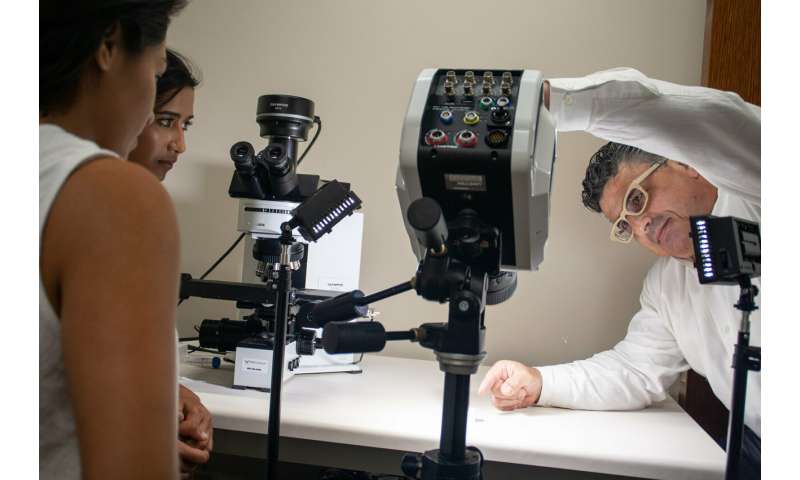 A mutant gene that encodes a brain protein in a child with autism has been placed into the brains of fruit flies. Fruit flies hosting that gene produce the variant human brain protein and show abnormal behaviors of fear, repetitive activity and altered social interaction, reminiscent of autism impairments.

The genetic variant was found in the Simon Simplex Collection, which has collected genetic samples from 2,600 simplex families with autism spectrum disorder, or ASD. The brain protein is the dopamine transporter, or DAT, whose job is to pump the neurotransmitter dopamine back into nerve cells once the neurotransmitter has been released. The mutant protein is missing a single amino acid.

A study of this variant DAT—from its impaired molecular mechanism to its effect on fruit fly behavior—has been published in Proceedings of the National Academy of Sciences by co-corresponding authors Aurelio Galli, Ph.D., and Eric Gouaux, Ph.D.

The vDAT fruit flies were also more fearful than normal fruit flies. In response to the sound of a predatory wasp, normal flies froze for about 150 milliseconds, and then they fled, as shown by a distinctive and rapid increase in average velocity that was captured by a 1,000-frame per second camera. In contrast, the vDAT fruit flies froze at the sound of the predator and showed little signs of fleeing during 600 milliseconds.

The vDAT fruit flies had impaired social interaction, as measured by changes in grouping. Many animal populations form temporary or permanent groups, such as flocks, schools or herds, that aid survival in the face of predators. Fleeing, in response to a threat, is an escape behavior where the flock size may compress or expand. The researchers found that normal fruit flies expanded their flock size in response to a threat—the sound of the predator wasp. The vDAT fruit flies, in contrast, compressed their flock size.

Besides the fruit fly behavior, the PNAS study is a comprehensive multidisciplinary approach that gets at some root causes of autism to a degree of detail that could make potential therapeutic treatments more realizable in the future.

Besides vDAT, the labs of Galli and Heinrich Matthies, Ph.D., assistant professor in the UAB Department of Surgery, have identified several other mutations in the human DAT gene that affect DAT function in individuals with ASD. For these people, disruption of dopamine transport appears to be a risk factor that promotes complications associated with ASD.

“The experimental paradigms we describe here,” Galli said, “provide a framework for molecular and behavioral analysis of novel DAT variants that are discovered by genetic analyses of individuals with ASD or related neuropsychiatric illness, as well as other disease-linked mutants that are emerging from precision medicine initiatives.”

Galli and Gouaux’s PNAS research went from human genetics to a basic animal model with simplified behavior, as detected by a new high-powered analysis. It investigated the underlying molecular mechanisms and basic biological functions with ever greater resolution, through studies at the cell level and all the way down to a bacterial system. Each added system was more fundamental with regard to biological complexity and phylogenetic level.

The researchers showed that vDAT cells have impaired dopamine transport and impaired DAT-mediated electrical currents. Also, expression of the human vDAT reduced dopamine uptake in the whole brain of fruit flies. These findings support the idea that human DAT dysfunction in ASD stems from specific and yet distinct mechanisms.