How a popular antidepressant drug could rewire the brain 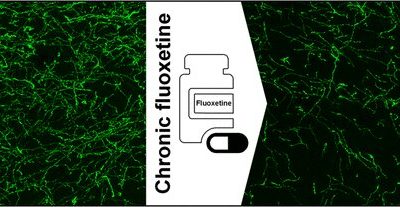 Prozac, the trade name for the drug fluoxetine, was introduced to the U.S. market for the treatment of depression in 1988. Thirty years later, scientists still don’t know exactly how the medication exerts its mood-lifting effects. Now, researchers report that, in addition to the drug’s known action on serotonin receptors, fluoxetine could rearrange nerve fibers in the hippocampus of mouse brains. They report their results in ACS Chemical Neuroscience.

Fluoxetine was the first drug in the class of compounds known as selective serotonin reuptake inhibitors (SSRIs) to be approved by the U.S. Food and Drug Administration. SSRIs are thought to work primarily by increasing the amount of the neurotransmitter serotonin that is available for signaling between neurons, but researchers suspected that other processes could be going on. In past studies, Massimo Pasqualetti and colleagues showed that genetic depletion and restoration of serotonin in mice could rearrange hippocampal nerve fibers. Now, they wanted to see if the more subtle changes in serotonin availability caused by fluoxetine treatment could have the same effect.