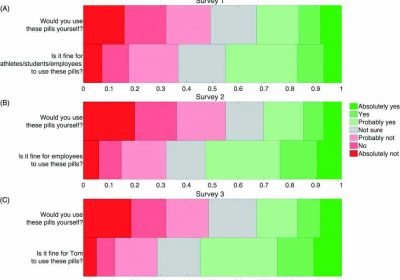 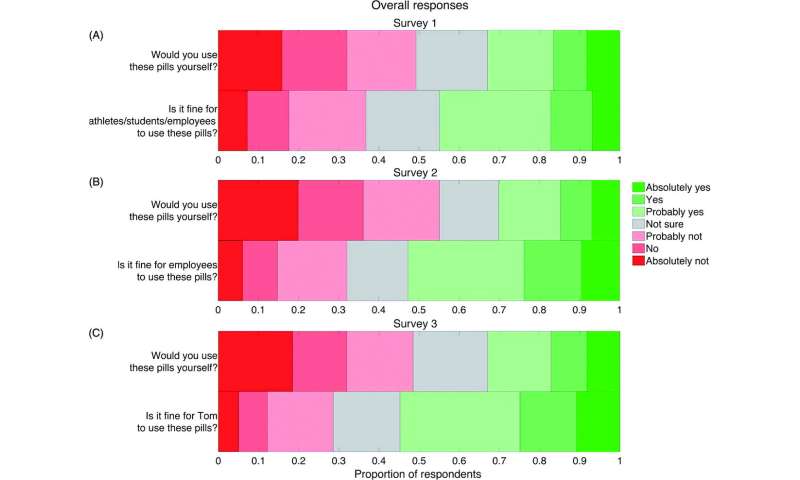 The general public largely views the use of cognitive enhancers such as Adderall as an acceptable practice when used by adults in the workplace, suggests a new study from Penn Medicine neurologists, which published this week in AJOB Neuroscience. The researchers, however, found that acceptability of that use depends on several factors, including framing and who is taking them.

Researchers found that people are more likely to accept the practice when it’s positively framed—such as referring to cognitive enhancement as “fuel” versus “steroids”—and when the users are neither students nor athletes.

“We have become a culture constantly focused on progress and achievement, which has caused many to turn to cognitive enhancers to keep up and get ahead,” said senior author Anjan Chatterjee, MD, a professor of Neurology, and director of the Penn Center for Neuroaesthetics. “While some see this as a way to maximize potential, others view it as a misuse, akin to cheating. Our study sheds light on the attitudes of the public which may help us better understand, discuss, and address the misuse of these medications among adolescents and adults.”

While there is limited evidence to support the claims that cognitive enhancers improve a healthy person’s cognition and mental performance, there are known side effects and risks associated with abuse, such as dependence and in some cases, cardiovascular issues. Still, misuse continues to rise among adolescents and adults, with millions of Americans misusing them with the intent to boost productivity or alertness, recent studies have shown.

The public’s attitudes about students and athletes using enhancers has been well-studied—and it’s mostly viewed as negative—but less is known about the public’s opinion about use in the workplace.

In the new study, 3,700 participants across the United States were asked to complete three surveys using Amazon’s Mechanical Turk, an online platform where users sign in to complete tasks. Participants were exposed to scenarios describing an individual using cognitive enhancers, with varied framing metaphors (“fuel” versus “steroid”) and context of use (professional athletes versus students versus employees). The survey used the seven-point Likert scale—answers ranging from “absolutely yes” to “absolutely not—to gauge each participant’s level of acceptance in different scenarios.

Results show that participants were more likely to support the use of cognitive enhancements by others as opposed to their own use, and were more accepting when the use of enhancements by others was framed with a fuel metaphor. More acceptance of the fuel metaphor, the authors said, is likely due to the notion that fuel is intended to maximize potential, while the steroid metaphor advocates minimizing effort, making the achievement seem inauthentic.

“These are the two arguments typically invoked by proponents and opponents today, and it underscores the notion that metaphors may be more likely to sway people’s opinion toward public policy,” explains the study’s first author Erin C. Conrad, MD, a resident in the department of Neurology.

“Use of cognitive enhancers by athletes or students may be less acceptable than use by employees in the workplace because of the perceived higher gain to society in the latter,” Conrad said. “Unlike a student improving a test score or an athlete winning a race, when the workforce is enhanced, everyone stands to benefit.”

Given the varied levels of acceptability in the workplace compared to other contexts, different policies and approaches should be considered by both health care providers and policymakers in order to address or curb misuse among adults and adolescents, the authors said. Policy should also address the public’s concerns of safety and naturalness of these enhancers.