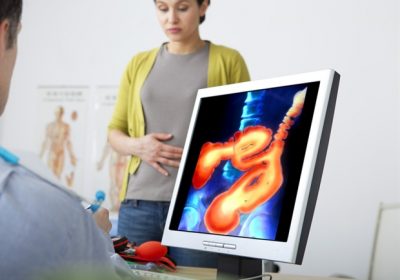 Juvenile polyposis syndrome is a genetic condition characterized by the formation of polyps in the colon, or more rarely, in the stomach of the affected young person. Most cases present by the time they are 20 years old. Several types are recognized, namely:

In the first type, polyps are present in the whole of the gastrointestinal tract from infancy. The other two variants show polyp formation either throughout the whole digestive tract (in the generalized form) or only in the colon, from childhood onwards. The infant form has the worst prognosis.

Juvenile polyposis is an autosomal dominant hereditary and condition . It is caused by a mutation in one of several genes that regulate signaling from the cell membrane to the nucleus. The cell membrane senses and responds to changes in the environment through these signals. The nucleus responds by specific gene regulation to produce required changes in cell protein synthesis, cell proliferation, and cell maturation.

When certain genes are affected by mutation, the abnormal protein synthesis results in unregulated growth and proliferation of the intestinal or gastrointestinal mucosal cells, leading to polyp formation.

The BMPR1A gene is responsible for translating a protein called the bone morphogenetic protein receptor 1A. This protein is actually a receptor for a ligand protein which forms part of the transforming growth factor (TGF)-beta pathway. TGF-beta is an important cell signaling protein which acts by binding to receptors on the cell membrane. Mutations in the BMPR1A gene lead to the failure of proper transmission of membrane-nucleus signals, and dysregulation of the pathway.

The SMAD 4 gene is responsible for synthesizing the SMAD 4 protein. A group of SMAD proteins bind other proteins to form a complex. SMAD protein-complex formation, activated by BMPR1A ligand binding,  is necessary before the proteins can be transported into the nucleus. In the nucleus, t he complex acts as a transcription factor, binding to certain areas of the DNA . I t controls cell growth and proliferation by determining the level of activation of specific genes. It also acts as a tumor suppressor. Abnormal SMAD 4 activity is therefore a tumor promoter. Most patients with this mutation have a condition an abnormal blood vessel condition called hereditary hemorrhagic telangiectasia (HHT) which can cause nose bleeds.

These mutations are usually carried in one of the parents, and transferred to the offspring in a 50:50 ratio. In a quarter of all cases, however, no family history is present, and the mutation is de novo.

Juvenile polyposis produces the most severe symptoms in the infantile type. This form presents with multiple polyps scattered throughout the gastrointestinal tract. The infant may have a complicating serious condition called protein-losing enteropathy, which presents with the following symptoms:

Most patients have polyps by the time they are 20 years, but the number may vary from as few as four to one hundred.

Many patients may have:

In many patients, from 15 to 20 per hundred, other abnormalities are detected, including: