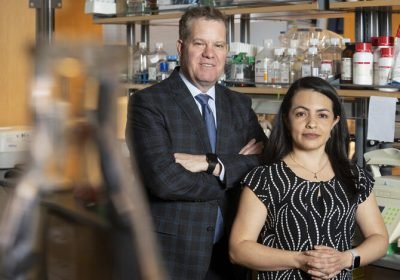 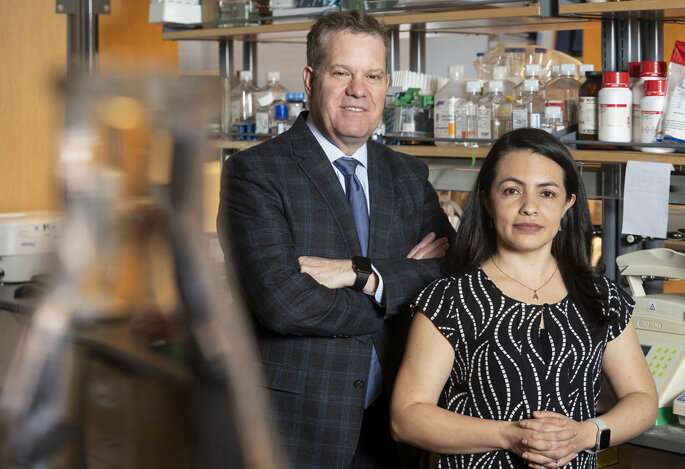 A medicine currently being tested as a chemoprevention agent for multiple types of cancer has more than one trick in its bag when it comes to preventing stomach cancer, Vanderbilt researchers have discovered.

The investigators found that in addition to its known ability to block the production of cell growth compounds, the drug DFMO (difluoromethylornithine) acts directly on the bacterium Helicobacter pylori to reduce its virulence. H. pylori infection is the primary cause of gastric cancer.

The findings, reported in the March 12 issue of Proceedings of the National Academy of Sciences, support further studies of DFMO for the prevention of stomach cancer, the third leading cause of cancer deaths worldwide.

H. pylori infects the stomachs of half of the human population, but only about 1 percent of infected individuals develop stomach cancer. Although it’s possible to treat the infection to prevent stomach cancer, it’s not clear whom to treat. Plus, the bug may be conferring beneficial effects—esophageal reflux diseases, asthma and other allergic disorders occur more frequently in people who are not infected with H. pylori.

“H. pylori has co-evolved with humans for at least 60,000 years, probably longer, and attempting to prevent stomach cancer by eliminating the infection with widespread use of antibiotics is not necessarily a good idea,” said Keith Wilson, MD, Thomas F. Frist Sr. Professor of Medicine and professor of Pathology, Microbiology and Immunology.

“Our study suggests that it might be possible to reduce the virulence of the bacteria, without having to eliminate it. It’s a speculative and unusual way to think about an infection, but it could be an interesting strategy.”

Wilson, who also directs the Vanderbilt Center for Mucosal Inflammation and Cancer, and his team previously linked the production of cell growth compounds called polyamines to the development of stomach cancer in an H. pylori-infected animal model. They demonstrated that treatment of the animals with DFMO, which inhibits an enzyme that is key to the production of polyamines, prevents stomach cancer.

Their findings are the basis for an ongoing clinical trial of DFMO for stomach cancer prevention in Honduras and Puerto Rico.

Patients with pre-malignant lesions in the stomach, as determined by endoscopy, are enrolled in the trial of DFMO and will be studied for disease progression.

To further explore how DFMO works, J. Carolina Sierra, Ph.D., research instructor in Medicine, collected H. pyloribacteria from infected animals that had been treated (or not) with DFMO. Using an in vitro test, she assessed the activity of one of the main H. pylori virulence factors, a protein called CagA. CagA is “injected” into stomach epithelial cells, where it contributes to oncogenic signaling pathways.

“What we noticed is that bacterial strains coming from DFMO-treated animals have reduced ability to move this virulence factor into epithelial cells,” Sierra said.

The researchers discovered that DFMO treatment—in animals or in vitro—caused mutations in the H. pylori gene that encodes CagY, part of the translocation machinery that injects CagA into cells.

They demonstrated that animals infected with H. pylori strains containing mutations in the CagY gene did not develop stomach cancer.

“This drug (DFMO), which inhibits a very specific enzymatic pathway, also has what some might call ‘off target’ effects: it causes mutations in an H. pylori gene that affects the translocation of CagA,” Wilson said. “The vast majority of gastric cancer is associated with strains that are CagA-positive. If this drug interferes with CagA activity, that’s an added bonus.”