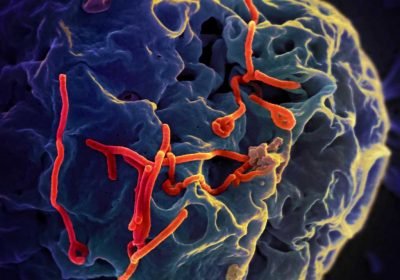 Antiviral antibodies produced by survivors of Ebola infection continue to evolve and improve after recovery, according to a detailed study of the immune responses of four people who received care at Emory University Hospital in 2014.

In particular, high levels of neutralizing antibodies- thought to be key to protecting someone against deadly infection—didn’t appear in patients’ blood until months after they left the hospital. Researchers have identified several examples of patient-derived antibodies with potential as therapeutic agents.

The findings could establish a benchmark of immune protection after vaccination, and have implications for the design of antiviral therapies and vaccines that provide long-lasting protection against Ebola.

The results are scheduled for publication in Cell.

Researchers at Emory Vaccine Center, led by Rafi Ahmed, Ph.D., collaborated with scientists from Stanford, the University of Wisconsin, the Centers for Disease Control and Prevention and the U.S. Army to study the four patients’ antibody immune responses. Ahmed is director of Emory Vaccine Center and a Georgia Research Alliance Eminent Scholar, and the research was supported by the Defense Advanced Research Projects Agency.

All four people studied were involved in responding to the 2014-2016 West African Ebola outbreak, which killed more than 11,000 people. For the current outbreak in the Democratic Republic of Congo, a vaccine is available and is highly effective, according to the World Health Organization. However, how long protection provided by that vaccine lasts, and how to monitor that protection, has been unclear. Some studies indicate that levels of neutralizing antibodies fall several months after vaccination.

“What we see is different from after vaccination,” says Carl Davis, Ph.D., a postdoctoral fellow in Ahmed’s laboratory and first author of the Cell paper. “We did not previously appreciate how long it takes to get to an optimal antibody response after infection.”

Antibodies are proteins produced by the immune system that can stick to viruses and other invaders; having lots of antibodies against a given virus is generally a sign of immunity. But not all antibodies are “neutralizing”, meaning that they can kill the virus and stop it from replicating. The researchers developed a system for producing the Ebola virus’s external glycoprotein by itself on the surface of cultured cells, in a context similar to how it appears on infected cells. This system was reliable at identifying neutralizing antibodies, they found.

During acute infection, the four patients who received care at Emory produced abundant antibodies that bound to Ebola viral proteins, but it took several months for them to make high levels of neutralizing antibodies. Over time, their antibodies changed in terms of which parts of the virus they targeted and how tightly they bound. The constant regions of the antiviral antibodies, which don’t touch virus but do recruit other immune components, also continued to evolve.

Neutralizing antibodies have tested as protective measures against Ebola, but the best ones have usually been isolated months or years after infection. From these survivors, the researchers isolated several high-affinity antibodies and mapped where they bound the virus. Some of these antibodies were able to protect mice against Ebola, and research is continuing on adapting them for therapeutic use, Ahmed says.

The continued evolution of the four patients’ immune responses was probably because the virus persists, in some form, in the body after recovery. Ebola is known to stick around at sites such as the eyes and the reproductive system, but its ability to “train” the immune system means that some bits of the virus were present in the lymph nodes.

“There is still some protein around that is tickling their B cells,” Davis says. “Even so, we know the immune system is able to control the virus, and it doesn’t reappear in the blood.”

Although effective antiviral antibodies didn’t dominate the immune response right away, the team was able to detect their appearance while the four patients’ acute infections were still active. Whether a primary antibody response does much to fight off the virus, compared with other parts of the immune system, has been a matter of debate, Davis says.

Of the four 2014 patients hospitalized at Emory, the first two became very sick, and a third was even sicker and required renal replacement therapy and respiratory support. Their doctors have pointed to the value of supportive care in their survival. They also received various antiviral countermeasures, ranging from supplementary antibodies to antiviral drugs, whose impact is uncertain.

“What was unexpected is that we saw a lot of similarity between the four people, in terms of their antibody responses,” Davis says, pointing out that the antibodies tended to converge on the same or similar sequences.