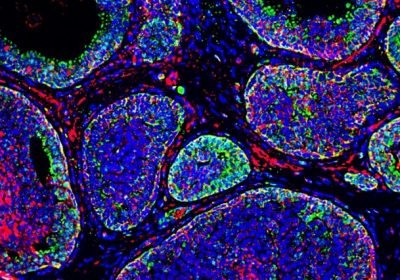 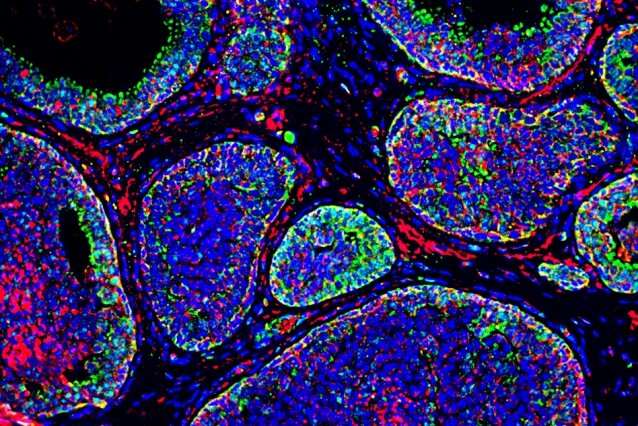 Scientists have long known that tumors have many pockets of high acidity, usually found deep within the tumor where little oxygen is available. However, a new study from MIT researchers has found that tumor surfaces are also highly acidic, and that this acidity helps tumors to become more invasive and metastatic.

The study found that the acidic environment helps tumor cells to produce proteins that make them more aggressive. The researchers also showed that they could reverse this process in mice by making the tumor environment less acidic.

“Our findings reinforce the view that tumor acidification is an important driver of aggressive tumor phenotypes, and it indicates that methods that target this acidity could be of value therapeutically,” says Frank Gertler, an MIT professor of biology, a member of MIT’s Koch Institute for Integrative Cancer Research, and the senior author of the study.

Former MIT postdoc Nazanin Rohani is the lead author of the study, which appears in the journal Cancer Research.

Scientists usually attribute a tumor’s high acidity to the lack of oxygen, or hypoxia, that often occurs in tumors because they don’t have an adequate blood supply. However, until now, it has been difficult to precisely map tumor acidity and determine whether it overlaps with hypoxic regions.

In this study, the MIT team used a probe called pH (Low) Insertion Peptide (pHLIP), originally developed by researchers at the University of Rhode Island, to map the acidic regions of breast tumors in mice. This peptide is floppy at normal pH but becomes more stable at low, acidic pH. When this happens, the peptide can insert itself into cell membranes. This allows the researchers to determine which cells have been exposed to acidic conditions, by identifying cells that have been tagged with the peptide.

To their surprise, the researchers found that not only were cells in the oxygen-deprived interior of the tumor acidic, there were also acidic regions at the boundary of the tumor and the structural tissue that surrounds it, known as the stroma.

“There was a great deal of tumor tissue that did not have any hallmarks of hypoxia that was quite clearly exposed to acidosis,” Gertler says. “We started looking at that, and we realized hypoxia probably wouldn’t explain the majority of regions of the tumor that were acidic.”

Further investigation revealed that many of the cells at the tumor surface had shifted to a type of cell metabolism known as aerobic glycolysis. This process generates lactic acid as a byproduct, which could account for the high acidity, Gertler says. The researchers also discovered that in these acidic regions, cells had turned on gene expression programs associated with invasion and metastasis. Nearly 3,000 genes showed pH-dependent changes in activity, and close to 300 displayed changes in how the genes are assembled, or spliced.

“Tumor acidosis gives rise to the expression of molecules involved in cell invasion and migration. This reprogramming, which is an intracellular response to a drop in extracellular pH, gives the cancer cells the ability to survive under low-pH conditions and proliferate,” Rohani says.

Those activated genes include Mena, which codes for a protein that normally plays a key role in embryonic development. Gertler’s lab had previously discovered that in some tumors, Mena is spliced differently, producing an alternative form of the protein known as MenaINV (invasive). This protein helps cells to migrate into blood vessels and spread though the body.

Another key protein that undergoes alternative splicing in acidic conditions is CD44, which also helps tumor cells to become more aggressive and break through the extracellular tissues that normally surround them. This study marks the first time that acidity has been shown to trigger alternative splicing for these two genes.

The researchers then decided to study how these genes would respond to decreasing the acidity of the tumor microenvironment. To do that, they added sodium bicarbonate to the mice’s drinking water. This treatment reduced tumor acidity and shifted gene expression closer to the normal state. In other studies, sodium bicarbonate has also been shown to reduce metastasis in mouse models.

Sodium bicarbonate would not be a feasible cancer treatment because it is not well-tolerated by humans, but other approaches that lower acidity could be worth exploring, Gertler says. The expression of new alternative splicing genes in response to the acidic microenvironment of the tumor helps cells survive, so this phenomenon could be exploited to reverse those programs and perturb tumor growth and potentially metastasis.