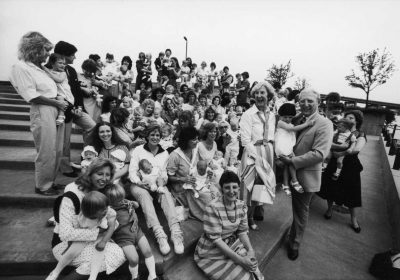 A 73-year-old Indian woman has become what is believed to be the oldest woman to give birth in the world – after giving birth to TWINS.

Erramatti Mangayamma has waited 60 YEARS to have children with her 80-year-old husband, Rajarao, a farmer.

But she is now the proud mother of twins after undergoing IVF.

Erramatti, from the small Nelapartipadu village in the Eastern Godavari district of India, was given the all-clear for IVF treatment at the Ahalya Hospital last year.

She has surpassed the age of the previous oldest mum in the world, Daljinder Kaur, from Punjab, India, who gave birth at the age of 70 in 2016.

Group portrait of 55 children, all born via in vitro fertilization, and their mothers, Norfolk, Virginia, 1985. Standing at center right are married doctors Georgeanna Jones (1913 – 2005) and Howard W. Jones, Jr., who pioneered the technique in the US. The baby in Howard Jones’s arms is Elizabeth Jordan Carr, the first IVF baby born in the US. (Photo by Robert Sherbow/The LIFE Images Collection via Getty Images/Getty Images)

LONDON – MARCH 12: Professor of Fertility Studies at Imperial College School of Medicine Lord Robert Winston poses while at the IRDB Building,Hammersmith Hospital,London,England on the 12th of March 2004.(Photo by Cambridge Jones/Getty Images)

LONDON, ENGLAND – NOVEMBER 2002: Amy Williams, 34, injects herself in her stomach with drugs to stimulate her production of eggs as part of her IVF treatment for infertility.She gives herself the injections at home each day for between two and three weeks.(Photo by Tina Stallard/Getty Images)

Sandra Dill for story on women on the IVF program. May 08, 1989. (Photo by Peter Rae/Fairfax Media via Getty Images).

David Van Gent looks and acts just like any other baby approaching his first birthday – but the happy milestone will be celebrated by more people than just his family and friends.Doctors and Nurses at Royal North Shore Hospital, for instance, will remember the day of his birth well.David was NSW’s first test-tube baby – born on May 12 last year – the first of 14 births in the hospital’s in-vitro fertilisation program.His mother, Mrs. Lida Van Gent,said yesterday: “After so long, it’s wonderful to have our own baby – and there are many other couples who are indebted. forever to the hospital for the chance to have a family.”Another test-tube baby is due next week, and altogether 25 women are expecting. May 6, 1984. (Photo by Julian Kevin Zakaras/Fairfax Media via Getty Images).

British nurse and embryologist Jean Purdy (1945 – 1985) and physiologist Robert Edwards in their research laboratory in Cambridge, 28th February 1968. Purdy is handing Edwards a dish taken from an incubator, containing human egg cells, which have been fertilized outside the body. Purdy, Edwards and obstetrician Patrick Steptoe worked together to develop the techniques of in-vitro fertilisation (IVF), with the first test-tube baby, being born nine years later in 1978. (Photo by Central Press/Hulton Archive/Getty Images)

1st March 1969:Dr Robert Edwards with his team at Cambridge in the early days of research into in vitro fertilisation.(Photo by Central Press/Getty Images)

NEW YORK – AUGUST 15: Doctors perform a laparoscopy on a woman August 15, 1988 in preparation for in vitro fertilization. (Photo by Yvonne Hemsey/Getty Images)

Louise Brown (top) from England, the first in-vitro baby born 15 years ago, hugs other children born with the help of in-vitro fertilization during a get together at Columbia-Presbyterian Hospital to promote the program 05 October 1993. With Brown, from L to R, are Laura Valenti, 2, Phoebe Maddox, 2, and Monica Hendricks, 5. (Photo credit should read RACHEL COBB/AFP/Getty Images)

Nepalese nurses care for the countries first test-tube twin babies (C) at the In-Vitro Fertilization Centre of Om Hospital near Kathmandu 04 March 2005. Kumudini Koirala gave birth to twince baby boys weighing 2.7kg and 3kg respectively. The births came as good news for Nepal, which has been in a state of crisis since King Gyanendra seized power on 01February, and launched a crackdown on the independent media amid an increasingly deadly Maoist insurgency. AFP PHOTO/DEVENDRA M SINGH (Photo credit should read DEVENDRA M SINGH/AFP/Getty Images)

Lehman Best holds a photo of the couple’s two healthiest embryos before in vitro fertilization at North Carolina Center for Reproductive Medicine in Cary on Friday, October 12, 2007. Best jokes about ‘little Lehman and Lanelle’ as he cradles the photo of the embryos.(Photo by Juli Leonard/Raleigh News & Observer/MCT via Getty Images)

NANTES, FRANCE – MARCH 23:Staff work in a hospital on March 23, 2011 in Nantes, France. The center of medically assisted procreation Hospital of Nantes is the first center in France to benefit from renting an Embryoscope for conducting an international collaborative study. The Embryoscope consists of an incubator to receive the embryo; in the incubator a microscope is installed to continuously visualize the development of the embryo on the computer screen. Instead of leaving the embryo in the incubator for observation under the microscope as it is today, this very high-tech equipment meets all the conditions necessary for its cultivation by guaranteeing a stable environment. Embryoscope is developed by the Danish company Unisense Fertilitech and should improve the chances of success of IVF. The center of medically assisted procreation from Nantes hospital performs each year about 1,100 attempts at in vitro fertilization, which places it among the top ten French centers.(Photo by Alain DENANTES/Gamma-Rapho via Getty Images)

A technician works on in vitro fertilization (IVF) for livestock in the genetic research and development center at the Blanca From The Pyrenees dairy farm, partnered with Ponderosa Holsteins, in Els Hostalets de Tost, Spain, on Thursday, June 4, 2015. Global production of milk, cheese and butter will rise to records this year, according to the U.S. Department of Agriculture. Photographer: Pau Barrena/Bloomberg via Getty ImagesUp Next

The pair, married in 1962 and until now have never been parents.

The most wins at the World Beard and Moustache Championships is 8 and was achieved by Karl-Heinz Hille (Germany). From 1999 to 2011, Hille has been competing in the Imperial partial beard category. His most recent success was in Trondheim, Norway, in 2011. (Guinness World Records)

The largest flesh tunnel (earlobe) is 10.5cm (4.14 in) and was achieved by Kalawelo Kaiwi (USA) as measured at the Hilo Natural Health Clinic in Hawaii, on 14 April 2014. Whilst there are widely reported claims of larger flesh tunnels, tattoo and body-mod artist Kala has the largest fully verified flesh tunnels. They are about the diameter of a teacup, and big enough to fit a clenched fist through. (Guinness World Records)

The most flesh tunnels in the face is 11 and was achieved by Joel Miggler (Germany) as verified in Küssaberg, Germany, on 27 November 2014. Joel’s flesh tunnels has a size ranging from 3 to 34 mm. (Guinness World Records)

Garry Turner (UK) is able to stretch the skin of his stomach to a distended length of 15.8 cm (6.25 in) due to a rare medical condition called Ehlers-Danlos Syndrome, a disorder of the connective tissues affecting the skin, ligaments and internal organs. (Guinness World Records)

The most fingers and toes (polydactylism) on a living person is 28, which belong to Devendra Suthar, and was confirmed in Himatnagar,Gujarat, India on 11 November 2014. Devendra Suthar has 14 fingers and 14 toes. (Guinness World Records)