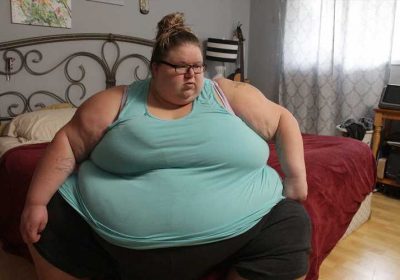 Brianne Dias was doing well — after hitting 742 lbs., she had successfully lost nearly 400 lbs. and celebrated her achievement with skin removal surgery. But when she returned home from the hospital, she learned that her husband Rick was leaving her for another woman.

Devastated, the 33-year-old didn't leave her bed for several days, putting her into a "life-threatening" situation so soon after surgery.

"She got a little depressed and discouraged, so she wasn't getting up and walking around this past week like she was supposed to, and started having some pain in her legs and her side and started having some trouble breathing," says Dr. Younan Nowzaradan, her weight loss surgeon, in this exclusive clip from Wednesday's episode of My 600-Lb. Life: Where Are They Now. "And so the concern is that she might have a blood clot that's formed in her legs from being immobile after a major operation." As medical staff draw blood from Dias and check her vitals, Nowzaradan explains that any blood clots could dislodge and move towards the lungs, causing "a pulmonary embolism that could be deadly."

"It's very important that we determine if she has a clot or not, so we can address it before anything life-threatening develops," he says.

Nowzaradan says that if they find a blood clot, Dias will need to immediately go into surgery to stop it. "But I don't want to put any more strain on her body with another procedure this soon after her skin removal surgery." Initial scans show that Dias does not have any blood clots in her legs, but they soon learn that it's because two blood clots have already dislodged and moved to her lungs.

"We found a blood clot in her lungs, so right now there is a ticking clock, because at any moment this could lead to a life-threatening event that there's a chance she won't survive," he says.