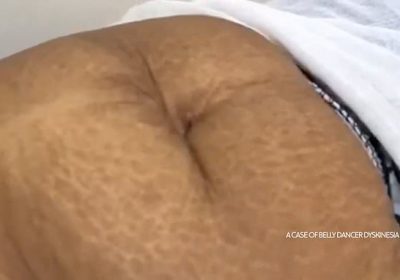 Astounded doctors have shared footage of an Ethiopian woman’s stomach wriggling naturally, like that of a belly dancer.

The 54-year-old, whose tale was published in a medical journal, was plagued by the unusual ‘writhing’ motions for six years.

Medics were originally stumped by her bizarre, involuntary movements and drugs never helped calm them down.

She was eventually diagnosed with ‘belly dancer dyskinesia’, becoming one of just a handful to have ever been struck by the rare disorder. 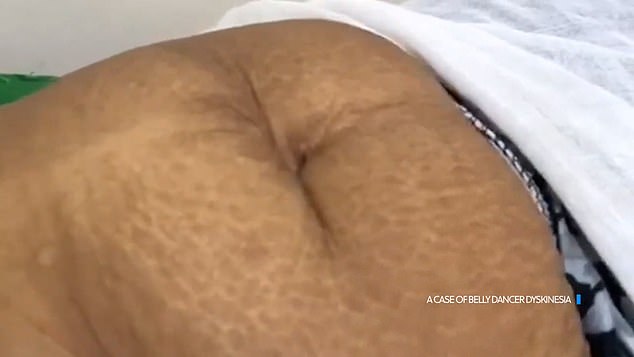 The unidentified 54-year-old woman, from Ethiopia, is one of just a handful of people in the world known to suffer from the rare stomach disorder (pictured above) that triggers painless but unrelenting belly movements

Although the erratic wriggles alarmed the unidentified woman, they weren’t painful.

And medication, in the form of benzodiazepines, eventually helped to clear her of the disorder.

The mother-of-eight, from Addis Ababa, attended the hospital complaining of her abdominal movements, bloating and indigestion.

What is belly dancer dyskinesia?

BDD is an extremely rare, poorly understood phenomenon that significantly affects a patient’s quality of life.

According to medics, finding an effective treatment for the condition can often be challenging.

While surgical procedures or events of local trauma are thought to trigger around half of all cases, various other factors including antipsychotic medications have also been reported to cause BDD.

She traced her strange symptoms — which would disappear after fasting —back to a procedure to remove her gallbladder.

But test results for all routine physical exams came back as normal, leaving doctors perplexed.

A respiratory condition — which the medics subsequently thought may be to blame — was also ruled out because the movements ‘did not respond to respiratory manoeuvres and distractions’.

Writing in the International Medical Case Reports Journal, the doctors diagnosed functional dyspepsia — recurring symptoms of an upset stomach with no obvious cause — and BDD, a condition which has seen ‘only a few cases’ recorded since its first report in 1990.

BDD, also known as diaphragmatic flutter, is characterised by its abnormal rippling movements.

Experts say it is down to involuntary contractions of the diaphragm which triggers movement in the anterior abdominal wall.

According to the Ethiopian medics, BDD is an ‘extremely rare’ and poorly understood ‘phenomenon’ that significantly affects a patient’s quality of life.

It is not clear what caused the woman’s condition.

But surgical procedures – including appendectomy, laparoscopy and major surgery – or events of local trauma are thought to trigger around half of all reported cases, with various other factors also reported to cause BDD, the medics said.

Some antipsychotic medications have also been shown to induce the condition, experts have said.

Patients who suffer with the condition often believe they are suffering from a digestive issue and may visit hospital gatstroenterology services, doctors warned.

There is currently no evidence-based treatment recommendation.

However, benzodiazepines – or ‘benzos’ – have been considered effective in a few cases. They work by slowing down the body and brain’s functions.

Botox injections and transcutaneous electrical nerve stimulation (TENS) have also been reported to effectively treat BDD in a handful of other cases.