Woman had 30 amputations because of her poor circulation 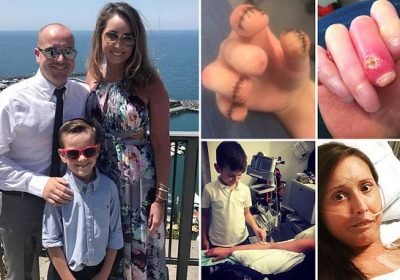 Mother, 32, has 30 amputations in six years to slice off parts of her fingers and toes because of conditions which reduce her blood circulation

A woman who had 30 amputations in six years due to a host of debilitating diseases has revealed how she fulfilled her dreams and became a mother against the odds.

Sarah Cox, 32, was diagnosed with an aggressive form of Raynaud’s disease, which cuts off the blood circulation to her hands and feet, when she was 17.

The mother also suffers from scleroderma and lupus, two conditions which cause the immune system to destroy healthy cells.

She has been forced to have most of her fingers and a toe amputated and was medically retired from her job as an emergency call operator with the police in 2011. 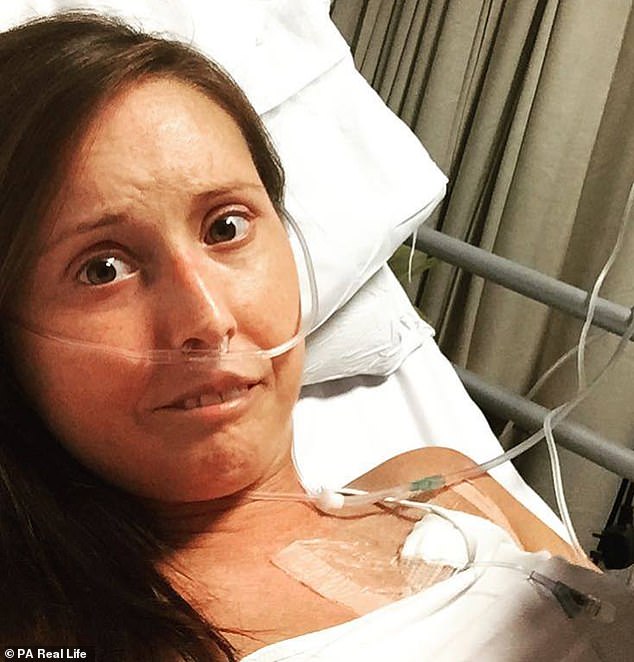 Sarah Cox, 32, has endured 30 amputations in six years due to a host of debilitating diseases that cut off the circulation to her hands and feet 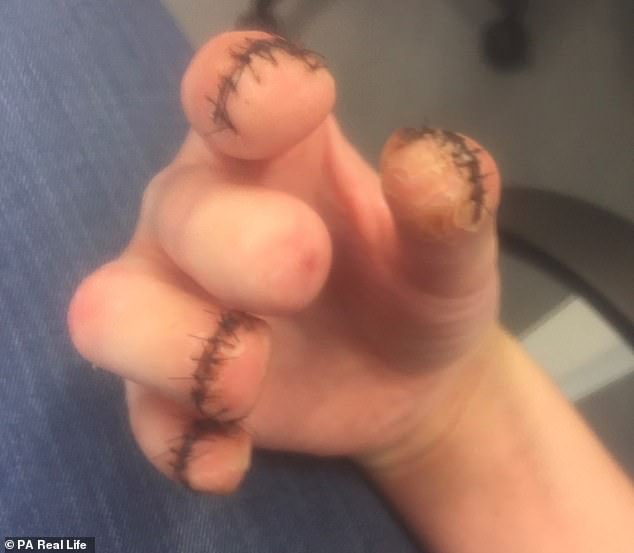 She suffers from Raynaud’s disease and scleroderma, which cut off blood supply to her fingertips, causing immense pain. Pictured: The mother has been forced to have her fingertips cut off to relieve the pain 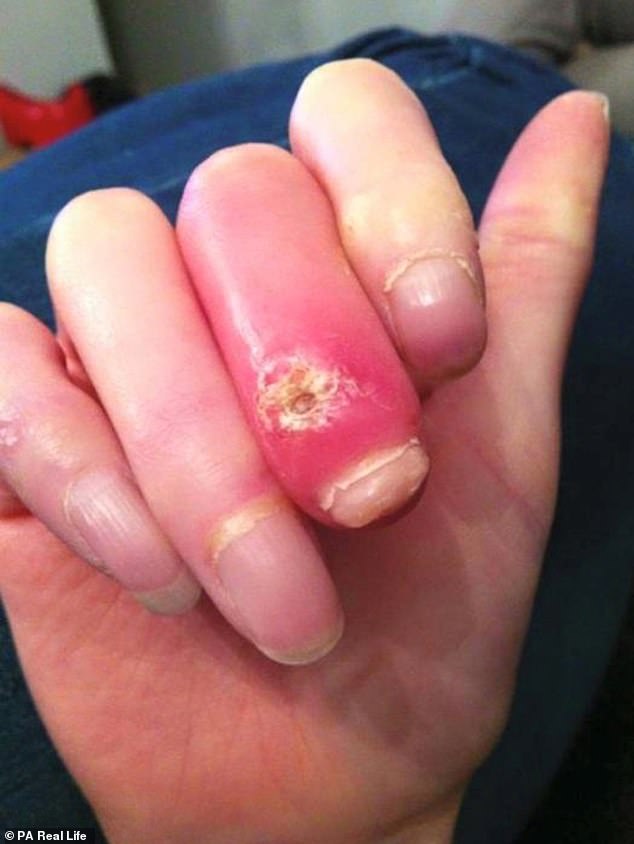 Mrs Cox said the pain was like having a ‘shard of glass being stabbed into the nail bed’. Pictured: Her finger before one of her amputations

Mrs Cox, from Kingswood in Bristol, was told she’d likely never have a child because the stress of pregnancy on her organs could kill her.

But the defiant mother went on to marry, join the police force and have a child.

Mrs Cox said she’s always refused to see herself as a victim and modestly claims she is simply ‘adaptable’.

She said: ‘I do have those private moments when I wobble, and I have cried a lot and felt lonely going through this over the years.

‘But I am stubborn, and I am determined to get as much as I can out of life.’

Recalling her schooldays, Mrs Cox, whose son James is now 10, said: ‘My hands would go purple when it was very cold. 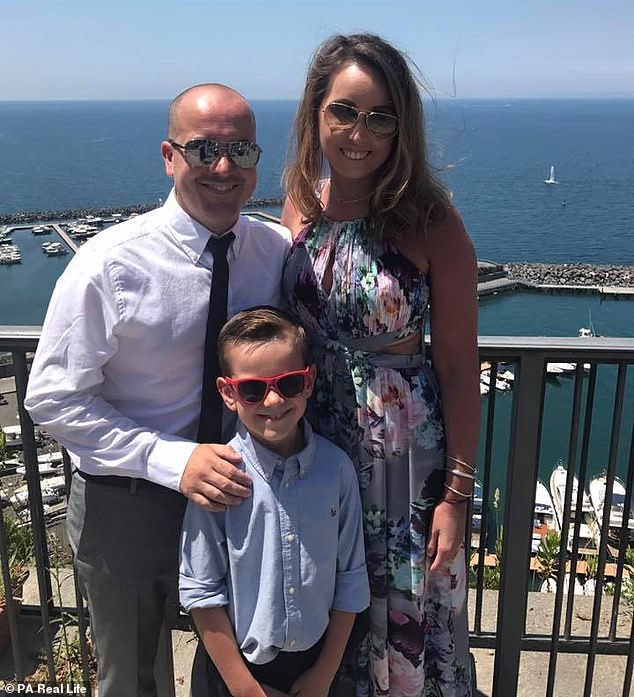 Mrs Cox, from Kingswood, Bristol, was told she’d likely never have a child because the stress of pregnancy on her organs could kill her. But she went on to have son James, now ten, with husband Rob (pictured together)

‘One of my schoolfriends said I should get checked out, so I went to the GP who sent me straight to the rheumatology clinic, where the specialists said, “We need to get you into hospital and start treatment today.”

‘I felt their words wash over me as they told me I had Raynaud’s and Lupus. I was just thinking “This is not part of my life plan. I’m going to university.”

‘I was given steroids intravenously to help with the joint pain I had in my knees and wrists and was in hospital for a fortnight while they treated me for the damage done to my organs.’

In patients with lupus the immune system attacks the body and can cause serious damage to organs including the lungs and kidneys.

As soon as she was discharged, Mrs Cox returned to school to study for her exams.

When one of her teachers told her nobody would think less of her if she dropped out to prioritise her health, she replied: ‘I’m going to get my A levels, watch me.’

True to her word, despite numerous stints in hospital, Mrs Cox passed her exams in 2004, shortly after she began dating her now-husband, Rob. 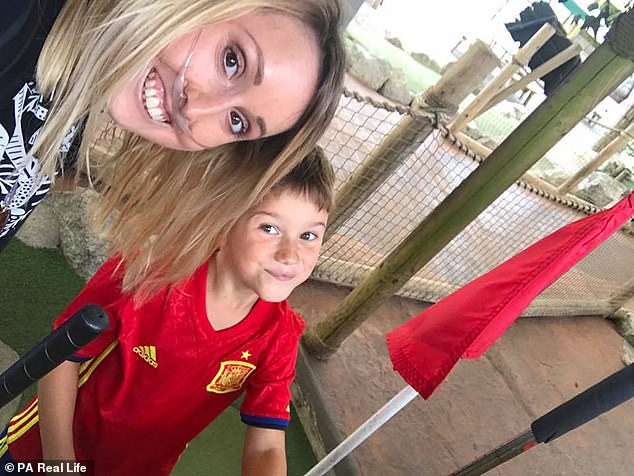 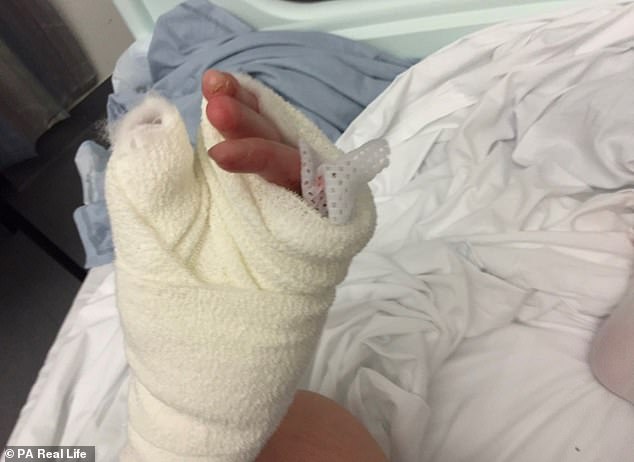 The mother’s hand after one of her 30 amputations. She revealed the first time she unravelled  her bandage she was ‘shocked more than anything’, but quickly adjusted to her stumps

‘When I first met Rob, I didn’t think I wanted to complicate my life with the distraction of a relationship, but I soon realised what a stable and nurturing influence he is, he’s just wonderful,’ she said.

WHAT AMPUTATIONS HAS MRS COX HAD?

Sarah Cox, 32, has had to have 30 amputations because Raynaud’s, scleroderma and lupus have cut off circulation in her hands and feet and caused tissue to die.

Here is a timeline of her amputations (each operation took off a small part of a finger rather than removing the whole digit):

Then, having been told she would struggle to conceive, Mrs Cox fell pregnant in 2008.

‘When I was 22, we decided we wanted a baby so went to talk to the doctors who said “Your disease is very active right now. Maybe wait and see if it settles before trying to get pregnant.”

‘But this is a progressive disease, which means things can also get worse, so we decided to go ahead – and James was conceived.’

Monitored weekly, by the time she was 36 weeks into her pregnancy, doctors told her the strain it was putting on her heart and liver meant the baby needed to come out right away.

‘We had always had a plan with the doctors, knowing our baby might be premature, but he weighed 7lb 4oz when he was born healthy, fit and fine,’ she added.

‘I just felt so lucky and so blessed. I loved every minute of being pregnant, but having a baby was a shock, as it is for any new mum.

‘The big difference for me was that I had to get him used to being looked after by family members when he was just a few weeks old, because I was in and out of hospital myself.’

Mrs Cox and her husband, 34, tied the knot in 2011. But the mother’s health continued to deteriorate and by the age of 24 she had her first operation.

Medics had to remove some of her fingernails, following infection to the surrounding tissue.

Mrs Cox said the pain was like a shard of glass being stabbed into the nail bed.

She added: ‘I had so many emergency trips to A&E in the dead of night. The pain is so bad, I promise you, that you would amputate your own fingers just to make it stop.

‘Nail removal is barbaric. My brother came with me to hospital and watched the procedure.

‘He had to go outside and vomit. But you will do anything to stop that pain.’

Scleroderma can also cause the blood supply to the fingertips to be cut off, meaning the tissue itself dies. 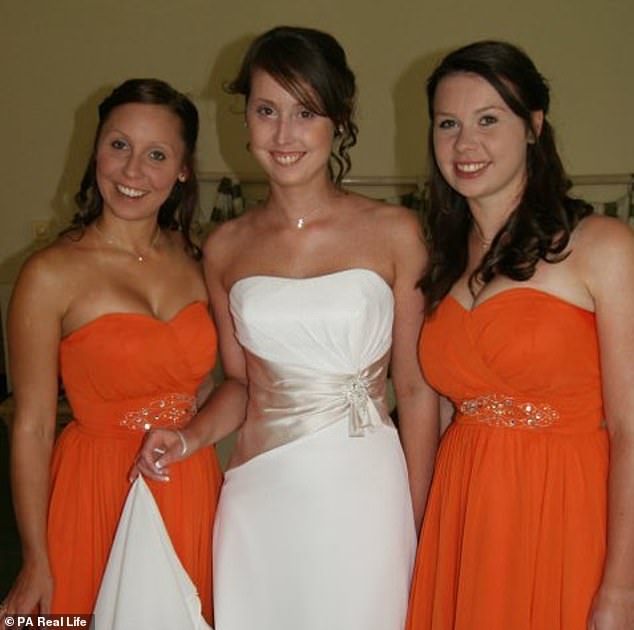 Mrs Cox on her wedding day in 2011 with her sisters, three years after giving birth to James 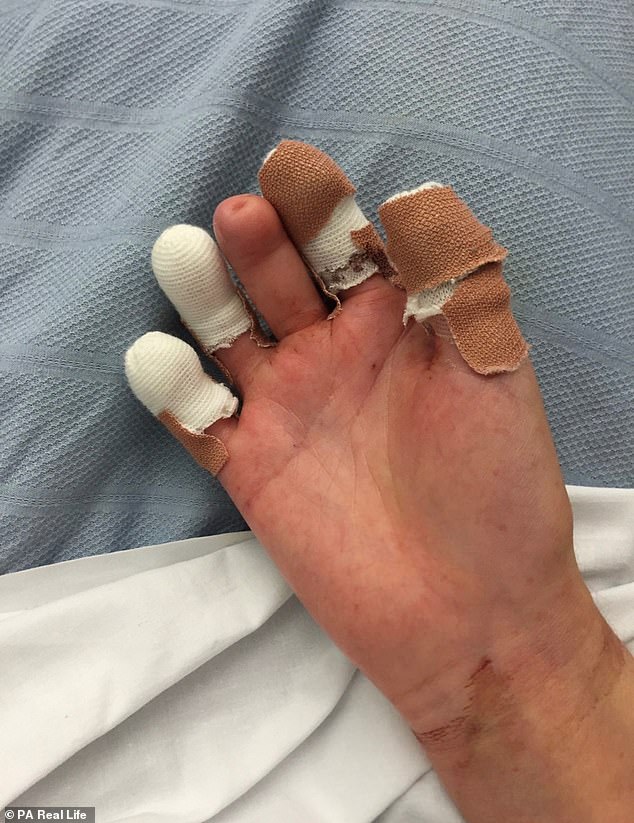 When this started happening, Mrs Cox knew she’d need to have some fingers amputated. In January 2013, she had her first finger removed.

‘The first time I saw it I was shocked more than anything, but I soon remembered the desperation I’d felt before and quickly adjusted.

‘I’ve had so many amputations now – a lot of which I’ve watched the surgeon doing – that I’ve become desensitised.

‘As awful as it looks, I’ve come to accept it. I’ve had the same hand surgeon for years and now I tell him when it’s time to take another part of the finger off.’

In 2014, the mother was hit with another setback.

She was diagnosed with interstitial lung disease – scarring and thickness of the lungs – making her breathless when she walked. 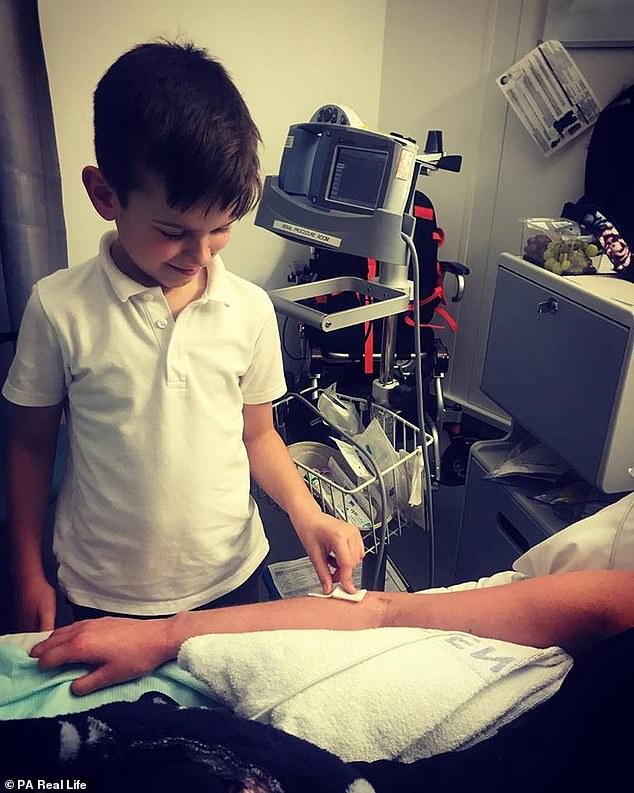 ‘I use an electric wheelchair, because I also had my little toe on my right foot removed in October 2017, which affects my balance,’ she explained.

‘I can walk a bit and try to when I can, but I also have to use oxygen when I move around, because of the damage to my lungs.

‘My circulation is shocking and getting worse and I have been warned by orthopaedic surgeons there might be a risk of below the knee amputation if the disease continues to progress.

‘I keep my spirits up by telling myself that I still have a lot to live for, my family more than anything else, and as long as I keep adapting, I will be fine.’

But Mrs Cox remains positive and said the entire family has adapted to cater to her needs. 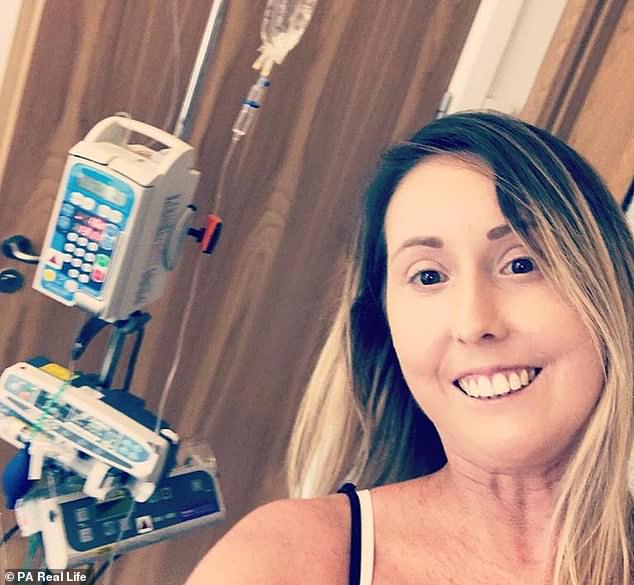 As she can no longer chop vegetables, she buys frozen ones and husband Rob helps her to get dressed each morning.

She said: ‘James will lace my trainers for me, too. I do need quite a lot of help now, but we’ve grown together as a family through this and it’s amazing how you can adapt.’

‘I have always said you need to live your life to the full. I plan things to look forward to all the time, even if it’s just a meal with family or a coffee with friends.

‘We do our best to go on holiday whenever we can, spending quality time together, in between all the drama that comes with my health condition.

‘I’ve had some horrendous lows, so we try to balance this by making as many happy memories as we can.’

But her biggest fear is leaving son James without a mother if anything happens to her.

‘Hopefully, I will keep on going for years yet, but I do worry about him,’ she added.

Mrs Cox, who has recently undergone a six-month course of chemotherapy in a bid to alleviate the symptoms of her scleroderma, now campaigns to raise awareness of unusual disabilities and works with the charity Scleroderma and Raynaud’s UK (SRUK).

She said: ‘I spend a lot of time being stared at, because I look different. Sometimes, I want to wear a T-shirt that says: “Just ask, instead of staring.”

‘I am now working with my local NHS Trust to create more awareness of the fact that disability doesn’t just mean someone in a wheelchair.

‘There are lots of unusual disabilities, like mine, and if people were better educated, I think they would feel less intimidated when they come across people like me.’

Lupus is a long-term condition causing inflammation to joints, skin and other organs.

What is Raynaud’s disease?

Raynaud’s condition, triggered by drops in temperature or an increase in stress, causes the blood vessels in the fingers and toes contract, cutting off blood supply.

It can also affect the tiny arteries in the nose, ears and tongue.

Typically, Raynaud’s causes the fingers or toes to turn white and numb.

Then, as the blood flow returns, they turn blue and eventually red, accompanied by a burning sensation. Attacks can last from a few minutes to an hour. 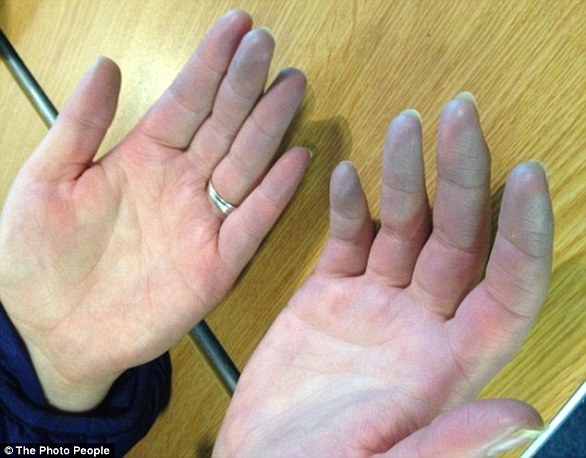 Nine out of ten cases are in women, with most sufferers having their first attack before the age of 40.

Although attacks peak in the cold winter months, symptoms can be triggered by everyday tasks such as taking food out of the freezer, air conditioning, or even stress — all of which cause blood vessels to contract.

Most patients can cope by wrapping up warm, although some develop painful weeping ulcers, which can become infected.

Although Raynaud’s is common, only a small number of patients go on to develop a more serious connective tissue disease called scleroderma.

It can cause disability and can be life-threatening, which is why it is important to be diagnosed early on so any complications of the condition can be properly treated.

Raynaud’s has a straightforward treatment and can be temporarily cured with a drug called nifedipine which relaxes the muscles of your heart and blood vessels and lowers blood pressure.