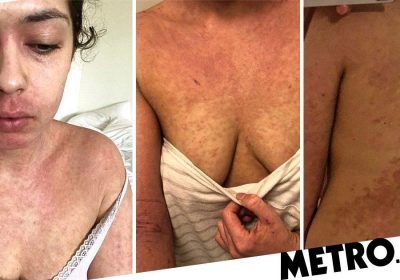 A woman was offered a drug used in chemotherapy to treat her severe eczema, but ended up ditching all of her medication instead to treat her condition naturally.

Sarra Cherbil had used topical steroids to treat her skin for years, but was never told by doctors that she shouldn’t use the creams long-term.

After a few years of using them, they lost their effect.

It was then recommended that Sarra, 27, start taking the chemotherapy drug methotrexate to treat her skin, but Sarra was desperate to get off medication and instead started researching her condition.

While searching her condition, she came across Topical Steroid Withdrawal, a condition which comes from using topical steroids to treat skin problems such as eczema. It can cause red, itchy burning skin and rashes.

After discovering this, Sarra started to understand why her skin had never been clear, and decided to stop all ointments back in January 2018.

At first, Sarra’s skin became incredibly painful but she is now seeing improvement.

‘When it came back, I remember being very embarrassed, especially when I got a rash on my face. The rash was mostly around the mouth and I thought it was ugly. I was afraid that people would laugh at me, and I then began to think that I was ugly and abnormal, unlike other girls around.’

‘The older I got, the more fixated I was about how I looked. I basically lived depending on how the eczema was.

‘If there wasn’t much eczema then, of course, I did more things but as soon as I started to get more and more rashes, then I pulled back more and felt bad mentally.

‘It feels like I have missed so much of my life because I have always had so much focus on my skin. As soon as I was among people, I was stressed that people would look and say bad things about eczema.

‘I was afraid that people would not think I was beautiful because I had eczema.’

Sarra said that when she found out about topical steroid withdrawal, she was relieved but also scared as she had no idea what it meant for her health – she was worried she was addicted to steroids, and about how her body and skin would react to a withdrawal from it.

However, she added: ‘But I felt like, this is it. This will be the thing that will heal my skin.’

Sarra has since been learning how to heal her skin naturally, documenting her progress on Instagram.

She said: ‘The most difficult thing has been the pain you feel every day. In the beginning, it was mostly physical pain that also became mental pain in the end.

‘It has been difficult because I have no idea what will happen, how the skin will be or how long it will take before healing.’

‘Although my skin is not perfect yet, I can find joy in other small things around me, which I certainly could not do six months ago, so that is positive.’

Now, Sarra only uses natural oils in her skin and no moisturisers in the hopes that her skin will be able to moisturise itself.

She said that for other sufferers looking to heal their skin, it’s important to have patience and to ‘never give up, no matter how difficult it is’.

She added: ‘Think about why you started. Try to find the best way for yourself.

‘What works for me may not work for someone else, each process is individual. Above all, you should not be so hard on yourself, but love yourself and give yourself the time to heal.’