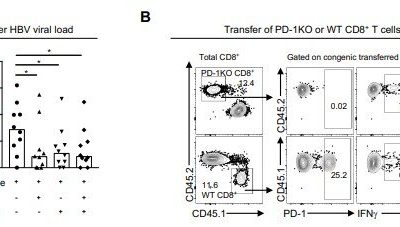 Scientists have discovered that the body’s own natural killer cells can suppress the immune benefits of therapeutic vaccines, a problem that can affect inoculations against chronic viral infections and cancer.

Indeed, the scientific literature is replete with examples of otherwise effective vaccines sometimes proving impotent. Increasingly, the reasons are pointing to an enemy within the body itself: a friend that transforms into a foe.

Scientists at University College London have been investigating the conundrum and have turned to an animal model to decipher how natural killer cells inadvertently blunt the benefits of vaccines.

In Science Translational Medicine, Dr. Mariana O. Diniz and colleagues report that natural killer cells can react so overwhelmingly after vaccination that they negatively impact a critical constituent of the immune response—CD8+T cells. This vital population can become overworked and exhausted, Diniz and her collaborators found, a phenomenon that causes vaccination to have little effectiveness.

“Therapeutic vaccines for chronic infections have reduced efficacy because of the presence of exhausted T cells and [an] environment that limits vaccine responses,” wrote Diniz, noting that the problem invariably begins with the aggression of natural killer cells.

Working with a mouse model, Diniz and colleagues have found that a combination treatment can boost robust immune responses after vaccination by acting on natural killer cells. The strategy, the team said, may eventually prove useful in the design and improvement of therapeutic vaccines for chronic viral infections and cancers.

“A better understanding of the mechanisms that regulate CD8+T cell responses to therapeutic vaccines is needed to develop approaches to enhance vaccine efficacy for chronic viral infections and cancers,” Diniz and the UCL team asserted in the journal.

Part of their research involved gaining an intimate knowledge of natural killer cells themselves, a population whose name alone can invoke potent images of destruction.

Natural killer cells are produced in the bone marrow as well as other sites throughout the body. Also known simply as a natural killer, or just a plain old NK cell, this population is a type of white blood cell containing granules—microscopic particles—with enzymes capable of killing tumor cells or cells infected with a virus.

Natural killers were initially thought to develop exclusively in the bone marrow, but relatively recent evidence in humans and mice suggests that these cells can also develop and mature in secondary lymphoid tissues, such as the tonsils, spleen and lymph nodes.

The killers are a type of immune cell and are crucial constituents of the innate immune system, the body’s rapid response network. It is present at birth and the immune response that is first on the scene in the event of an infection or cancer. The innate system exists separately from the adaptive immune system, which emerges around 12 months of age. The adaptive system, also known as acquired immunity, is composed of an array of specialized immune cells—T cells, B cells and protein antibodies—that seek and destroy foreign invaders.

While the innate immune system is noted for its rapid response, the adaptive is known for its recall and the ability to pounce on threats faster in the future by relying on its memory of the same invaders from the past.

The aim of the UCL research was to turn natural killer cells from foe to friend in situations of vaccination for chronic conditions. The team’s investigation revealed that natural killers impaired the response of T cells in mice to ChAdOx1-HBV, an experimental vaccine for chronic hepatitis B virus infection.

The scientists found that hepatitis B infection heightened the expression of the PD-L1 protein on the surface of natural killer cells in the liver, which in turn suppressed T cells that had been primed by the vaccine.

The team then applied a similar approach to cell samples from patients with chronic hepatitis B and discovered that the strategy can also yield benefits for humans.