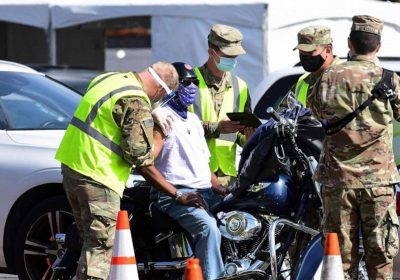 Appointments at a federally run vaccination hub at Chicago’s United Center opened on Thursday, with the first shots there scheduled to be given next week. It will be the first site in Cook County to offer the Johnson & Johnson vaccine against COVID-19.

The United Center is one of 18 community vaccination centers included in a White House plan to reach hard-hit, high-risk communities.

The Federal Emergency Management System and the Centers for Disease Control and Prevention worked with state and local partners to determine locations for those centers, using as a guide the CDC’s social vulnerability index, which uses census data to identify communities that need support before, during and after disasters.

“Vaccines for these centers are provided to the states above and beyond the regular allocations,” according to FEMA.

Collectively, those 18 sites will be able to administer 61,000 shots per day once they’re operating at full capacity.

The first such sites — two in California, three in Texas and two in New York — launched in late February with the capacity to vaccinate 3,000 to 6,000 people per day, depending on the location.

On Wednesday, nine other sites, including the Pennsylvania Convention Center, Miami-Dade Community College and New York National Guard Armory, followed suit, each with the capacity to vaccinate 1,000 to 6,000 people daily.

In addition to the pilot program, there are sites nationwide supported by 2,225 federal personnel, including members of FEMA, the CDC, the Department of Defense, the Coast Guard, the Forest Service and the Army Corps of Engineers.

How COVID-19 vaccine rollout compares to smallpox, polio and others in the past

People with antibodies after COVID-19 may have short-term virus protection: Study

As of Wednesday, FEMA had provided more than $4 billion in funding for vaccinations and established more than 450 community vaccination centers and 55 mobile vaccine centers around the country.