We Tried It: Justin Gelband's Workout Loved by Irina Shayk and Miranda Kerr 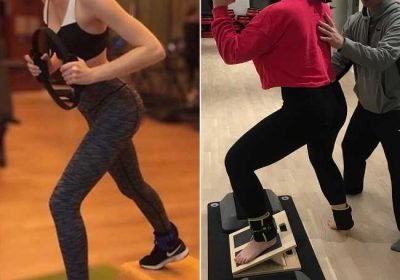 What It Is: JG Sculpt at The Justin Gelband Studio

Level of Difficulty: 7/10. The movements challenged and strengthened muscles I didn’t even know existed, but I left the class with more energy than I had before.

If you follow any Victoria’s Secret Angels on Instagram, you’ve probably seen trainer Justin Gelband. Models like Candice Swanepoel, Irina Shayk, Miranda Kerr, Romee Strijd, and Jasmine Tookes rely on the famed trainer to get runway ready. So when I had the chance to take a Gelband-led class at his new studio, I was excited to get a glimpse of what it takes to get those wings.

I learned that for Gelband’s clients — both models and mere mortals — it all begins with small but intense movements that target the core, inner thighs and glutes. I joined about 20 people for the JG Sculpt class at his New York City studio. We started with a quick warm-up before strapping on 2- to 4-lb. ankle weights, which we kept on for most of the 60-minute, $40 class. (New students can book 3 sessions for $115.)

Next Gelband told us to grab a mat, two steps (yes, like the ones from ’90s aerobics classes), and two small hand weights. He explained the importance of focusing on form. Gelband created his method to help rehabilitate his own body after a car accident left him unable to walk, and he continued to remind us that if a move felt painful, we were doing it incorrectly.

Throughout the first phase of the workout, Gelband dispensed individualized corrections and modifications to each student. Weights in hand, we did several reps of different sets, various versions of stepping on and off the step with one leg. The entire time, the standing leg was slightly bent, which fired up all the leg muscles for that hurts-so-good feeling. I worked through the first phase, getting familiar with the stages of a Gelband set, which starts with “This isn’t so bad!” and ends with “Okay, my legs are seriously shaking.”

For the next phase, we set up slant boards, which are a staple of Gelband’s training method for the VS Angels. He later told me doing the movements on the downward-tilting board activates the muscles the models rely on to flawlessly walk the runway in sky-high heels.

As someone who has twisted her ankle on the streets of New York in flats, I needed help. We did similar movements as in the first phase, but I felt the burn even more thanks to the slight knee bend on the slant board. Gelband took a hands-on approach to making sure everyone’s posture was perfectly tilted forward to stay balanced.

Finally, we put the boards and steps away and lay on our sides on our mats. Gelband took us through a series of almost microscopic leg movements. Though it might seem easy to raise and lower your leg an inch, exasperated sighs in the room proved otherwise.

The class ended with guided stretches on a foam roller which, after about 55 minutes of hard work, was a much-needed gift.

After class I asked Gelband if the workout differed from how he trains the VS Angels. Turns out, it doesn’t — at least not in a major way. “I’ll use the same equipment, but I’ll make it a little bit harder, a little bit more motions and movements,” he said. For example, instead of doing three sets, like we did, the models will do six. To supplement — and to get what Gelband referred to as “Olympic level” for the annual fashion show — he adds cardio like boxing, biking, swimming or walking.

Ultimately, said Gelband, he loves training people who are consistently looking to improve their technique. “Everything I do I build from the foundation up,” he explained, referring to his attention to form and posture. “Even if I’m training with Candice, or Irina, or Miranda for 12 and 13 years, they’re always still looking to be better, stronger, more agile, more supple.”

Verdict: If you’re looking for a challenging workout tailored to your ability, stop by Gelband’s studio. He designs each class based on students’ individual needs, so if you’re injured, pregnant or even have a weird crick in your neck, he will happily modify the moves. You’ll leave the class with more energy than you had before, and thanks to the foam roller, you’ll be able to walk up stairs the next day pain-free — with or without your stilettos and Fantasy Bra.