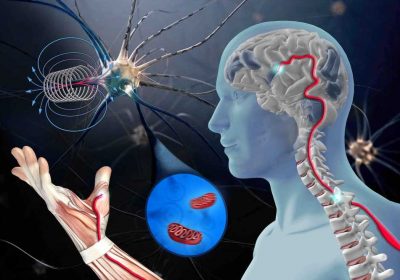 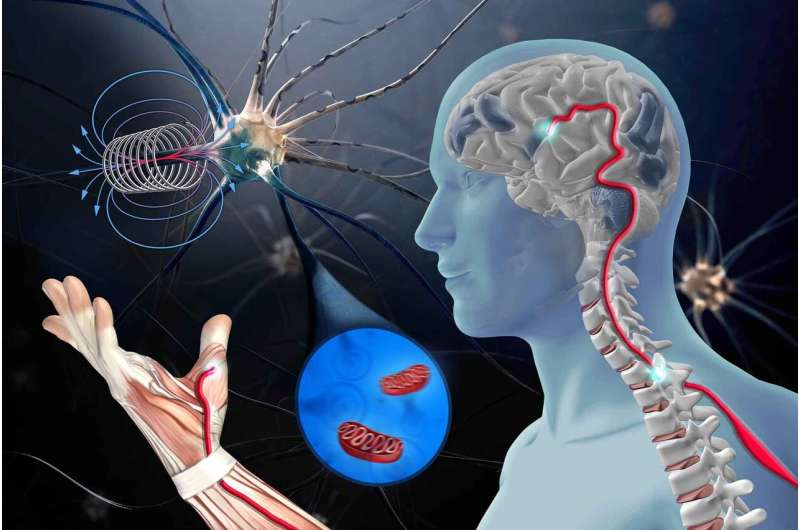 In motor neuron diseases of the nervous system, such as amyotrophic lateral sclerosis (ALS), commands can no longer be sent to the muscles. This gradually leads to paralysis. Physicist Dr. Thomas Herrmannsdörfer from the German national lab Helmholtz-Zentrum Dresden-Rossendorf (HZDR) and physician Prof. Richard Funk from the TU Dresden formulated the idea to selectively revive the motor neurons using magnetic fields. Initial laboratory research results have proven them right and are encouraging them to further pursue their project and plan a prototype therapy facility.

In healthy people, the so-called motor neurons—special nerve cells in the cerebral cortex, brain stem and spinal cord—give the skeletal muscles the signal to move. With ALS, these neurons are heavily damaged and no longer transmit signals. As a result, the muscles gradually wither away because they fail to receive instructions and can no longer function. Initial symptoms are usually problems with the arms and legs and in some patients, the disease also manifests itself in speech disorders or difficulties swallowing.

Although ALS has been known for approximately a hundred years, there has not yet been any prospect for a cure. Only drug therapies exist to relieve symptoms and slow the progression of the disease. The two Dresden scientists, Richard Funk and Thomas Herrmannsdörfer, are now pursuing a completely novel approach with their team. They want to reactivate the motor neurons using magnetic field pulses.

Every human cell as well as all its components, the cell organelles, have an electrical charge, an electrical potential. Research has meanwhile advanced to the point where changes in the membrane potential can be imaged under the microscope using electrosensitive dyes. This enables the researchers to observe how cells as well as cell organelles communicate with each other based on their different electrical potentials. When the electrical fields and hence the associated communication are defective, this leads to abnormal developments and, in the worst cases, to defective function. “Because we know that electrical currents flow, we also know that it must be possible to selectively intervene,” explains Richard Funk. And so, the idea was born to intervene electromagnetically.

Studies in the petri dish

In order to test their approach, the two scientists have meanwhile formed a team of experienced cell biologists at the HZDR to reprogram human skin cells into motor neurons. The researchers use cells from healthy individuals as well as from ALS patients. They also examined cell samples from different stages of the disease in the cell cultures taken from the ALS patients. The prepared cells were placed in petri dishes and exposed to different magnetic fields. “We could show in our experiments that certain pulse and frequency parameters improve the transport in the nerve processes that is disrupted in ALS,” Herrmannsdörfer is pleased to say. For example, the stimulation of mitochondrial transport was observed, which is of crucial importance for neuronal function. Mitochondria are considered the powerhouses of the cells and are responsible for the organism’s energy supply. Furthermore, the scientists could demonstrate that an accelerated outgrowth of nerve processes is achieved by the magnetic fields.

At least as astounding, however, is the result that although the ALS patient cells can be increased to the level of those in healthy individuals, the performance of cells from healthy people does not change significantly in the experiment. In short, healthy cells remain constant. Diseased cells experience a performance increase up to their former level before they were afflicted by the disease.

Funk and Herrmannsdörfer know there is a long road ahead despite these experimental results. “You have to take a deep breath and then think carefully about how to proceed. If this activation were to work not only with cells in the petri dish, but also in living individuals, better quality of life would truly be conceivable for ALS patients. Until then, there’s a lot of work for us to do,” says Funk.

After their initial successes in laboratory experiments, the two scientists together with their interdisciplinary team of the Dresden High Magnetic Field Laboratory at the HZDR are now constructing a magnetic pulse prototype therapy facility with which they aim to test the method they developed under realistic conditions. Funds were provided by the Free State of Saxony and by the European Union, which supports the project with approximately 1.1 million euros from its Regional Development Fund (ERDF). In addition, a working title has already been selected: NeuroMaX.

Funk’s and Herrmannsdörfer’s idea is meanwhile receiving broad support. In addition to the project team consisting of scientists from Germany, Thailand, India and Japan, several other institutes and departments at the HZDR, the Dresden International University and the TU Dresden are involved in NeuroMaX. The aim is to develop a prototype and, in a subsequent step, to carry out studies that will ultimately gain approval for use on patients.