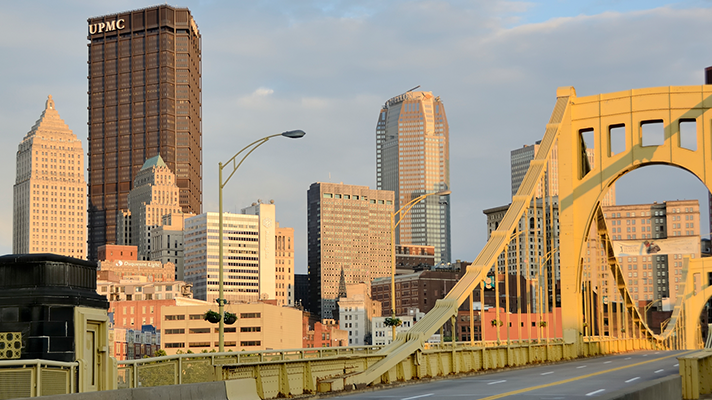 As both provider and payer, UPMC is not just an IDS, it’s an IDFS – what Chief Innovation Officer Dr. Rasu Shrestha describes as an “integrated delivery financial system.”

Managing those twin imperatives at such as high level means lots and lots of data.

“We have a lot of data across the health services group,” said Shrestha. “Clinical data, a lot of claims data from the health plan. We have more than 40 petabytes of data that’s doubling every 18 months. So that’s a lot of data. And there’s more data yet – genomic data, imaging data – that’s coming at us.”

UPMC has big goals as it tries to “redefine the future of health,” said Shrestha. But fundamental challenges remain, even as the health system continues to discover “really interesting things with other data elements that we just haven’t really gotten our arms around around in a really tangible way.”

For the former, that means social determinants of health data, for instance, and the fact that “ZIP code is a stronger determinant factor of outcomes than genetic code,” said Shrestha. “We’re doing a lot of things in that space, looking at the bottom of the iceberg, so to speak: data that we traditionally haven’t had access to, and looking across the continuum of care, shifting from a patient-centric model to more of a person centered model.”

But as UPMC ponders how to bring in bigger and more diverse data elements, “it’s important to strike the right balance,” he said. “The way we’re looking at our strategy, our programs and the initiatives coming out of UPMC Enterprises, is striking that right balance between precision and personalized medicine.”

The core goal of population health, of course, is to “look at all these data elements we’re talking about and it attempts to decrease the variations of care,” Shrestha explained.

“So, the population of diabetics living in a certain ZIP code that might have certain comorbidities such as CHF, we’re looking at that cohort and saying, ‘How can we decrease the variations in care? Out of the big data elements, how do we bring out best practices?’ Really trying to risk stratify that population and come up with the care measures that will work best for that strata of the population that we’re treating.”

On the other hand, with precision medicine, “what we’re doing is actually trying to increase the variations, and allow for all of the different elements that make that individual, that N of 1, unique,” he said.

“We’re looking at their genotypic biomarkers, trying to correlate that with the phenotypic data, and what we’re attempting to do is marry those two together, strike that right balance between precision medicine on hand and population health on the other – decreasing variation vs. increasing variation, and really getting to what’s in the best interest of that person – based on data we’ve amassed across populations and patients, but really just focusing on that person.”

This will be an ongoing goal for UPMC, said Shrestha especially “as we go into new territories with capabilities around artificial intelligence, machine learning, deep learning, we’ve navigated the space and kind of tamed the data beast: descriptive analytics, predictive, prescriptive. And we’ve veered toward more adaptive types of algorithms and analytics with a learning health system, which is really important.”

The aim is for these new algorithms to “augment the care that we’re providing our patients and health plan members,” he said. “So part of my talk will be to highlight our strategies to bring the human interface back into the conversation of how we’re leveraging data.

“What we’re trying to do with some of these innovations is to try to focus in on behavior and behavior change,” he added. “How do we make sure that we have the right digital nudges in place that would help them make the right decisions around lifestyle, around medication adherence, around exercise? All of these choices and behavior change is what we believe is at the very bottom of how we leverage big data to get at meaningful outcomes at the end of the day.”

At HIMSS19 in Orlando, Shrestha will offer advice and best practices, gleaned from his own experience at UPMC, for other provider organizations looking for tips on managing their own troves of diverse and difficult to manage data.

He’ll show how UPMC developed its analytics strategy and put in place KPIs and outcome measures to show how data was being put to work. And he’ll offer his perspective of sustenance models for similar data initiatives as health systems across the county work to manage the challenge.

Shrestha will share some of UPMC’s analytics best practices at HIMSS19 in a session titled “Big Data Healthcare: A Leader’s Story.” It’s scheduled for Monday, February 11, from 1:15-2:15 p.m. in room W207C.

Healthcare IT News is a publication of HIMSS Media.