Home » Health News » Type 2 diabetes: Include this oil in your diet to lower blood sugar

Type 2 diabetes: Include this oil in your diet to lower blood sugar 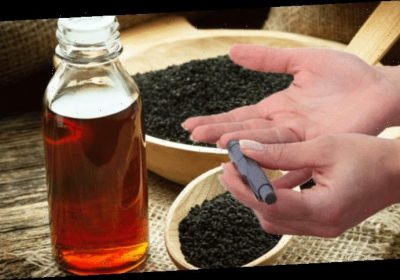 According the NHS, there’s nothing you cannot eat if you have type 2 diabetes, but you’ll have to limit certain foods, such as those containing high amounts of sugar, fat and salt.

These foods include biscuits, crisps, chocolates, cakes, ice-cream, butter and sugary drinks, which are high in calories and raise blood sugar levels. They’re also high in unhealthy saturated fats, which can wreak havoc on blood sugar levels and raise “bad” cholesterol – a waxy substance found in blood that be a precursor to heart disease.

In addition to limiting certain foods, certain dietary decisions have been shown to have a positive effect on blood sugar levels.

A 2016 overview in the British Journal of Pharmaceutical Research, indicated that the role of N. sativa seeds in treating diabetes is substantially important – enhancing insulin production, glucose tolerance, and beta cell proliferation.

As Diabetes.co.uk explains, beta cells are unique cells in the pancreas that produce, store and release the hormone insulin – a key component in blood sugar regulation.

In addition, a 2014 study concluded that adding turmeric and black seed to the diet of diabetic rats reduced blood glucose, water, and food intake.

Turmeric is a spice spice extracted from the ground roots of the turmeric plant, and has been touted as a panacea for a wide-range of health complications.

Among its benefits, research has shown the spice to boast blood-sugar lowering properties, and a 2013 review of studies suggests that curcumin can decrease the level of glucose in blood, as well as other diabetes-related complications.

Physical exercise helps lower your blood sugar level and you should aim for 2.5 hours of activity a week, according to the NHS. You can be active anywhere as long as what you’re doing gets you out of breath, including:

One of the primary benefits of exercise is it helps people to lose weight, and carrying excess weight is particularly risky for people with type 2 diabetes.

According to Diabetes.co.uk, studies suggest that abdominal fat causes fat cells to release ‘pro-inflammatory’ chemicals, which can make the body less sensitive to the insulin it produces by disrupting the function of insulin responsive cells and their ability to respond to insulin.

The health site added: “Obesity is also thought to trigger changes to the body’s metabolism. These changes cause fat tissue (adipose tissue) to release fat molecules into the blood, which can affect insulin responsive cells and lead to reduced insulin sensitivity.”

What are the symptoms of type 2 diabetes?

Many people have type 2 diabetes without realising because symptoms do not necessarily make you feel unwell.

Symptoms of type 2 diabetes include:

The NHS recommends visiting your GP if you have any of the symptoms of type 2 diabetes and you’re worried you may have a higher risk of getting it.

The health body said: “The earlier diabetes is diagnosed and treatment started, the better. Early treatment reduces your risk of other health problems.”