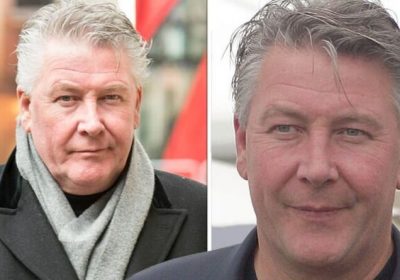 The 65-year-old is a trusted DIY specialist with his tips and tricks followed by many, so when the star suffered from a breast cancer scare back in 2002, Walsh used his platform to speak about the important health issue. The star encouraged people, especially young men, to go and see their doctors straight away if they find worrying signs or symptoms of cancer after Walsh admitted that to him, it was more of an “afterthought”.

With a history of breast cancer in his family, Walsh was recommended by doctors to go and see a consultant after he found two lumps on his chest.

Coincidentally, Walsh saw the same consultant that his 31-year-old sister had, after having a lumpectomy to remove cancerous and normal breast tissue.

The pair’s aunt also suffered from breast cancer when she turned 50, but was always in “denial” that there was a problem, meaning the disease was left untreated.

Speaking about his family history of the disease, Walsh told The Mirror in 2013: “She [his aunt] was in her late 50s when she developed symptoms but she went into denial about the problem.

“It was very sad, as she was a lovely woman who worked as a home help.”

Despite his concerning family history with breast cancer, Walsh admitted that he wasn’t “too worried” about going to hospital, but when the day of surgery arrived reality started to sink in.

“I just buried myself in my work and then went along for the day surgery where the lumps were removed under a general anaesthetic,” Walsh added.

“It was only then that it sort of hit me that this could actually be serious and I could have breast cancer, like my relatives.”

The NHS explains that breast cancer in men is often overlooked as a problem, but the condition affects around 370 individuals each year in the UK.

The condition affects a small amount of breast tissue that men have behind the nipples. Similarly to women, the condition is possible to treat and cure if it is found early and hasn’t spread.

Signs and symptoms of breast cancer in men are similar to signs that women will experience and include the following:

Noticing any of the above signs means it is time to seek a medical opinion, who will do some further tests to determine if cancer is present.

Thankfully in Walsh’s case, test results showed that the lumps were benign, but the star later confessed it was “a bit of a wake-up call” about the disease.

“I do hope men will take the issue of breast cancer seriously,” he warned back in 2013.

“I feel I have a duty to talk about male breast cancer as I feel like a lucky survivor and I do think men are more vulnerable.

“I want to make sure the message is out there that men need to be vigilant about their health too.

“Most just think it won’t happen to them.”

If diagnosed with breast cancer, treatment will depend on how far the cancer has spread. Possible treatment options include the following:

The NHS explains that many men have surgery followed by one or more of the other treatment options, to try and stop the cancer from coming back in the future.

Although it is impossible to prevent or predict who will get the condition, Cancer Research UK explains that some of the risk factors that puts men at risk of breast cancer includes: