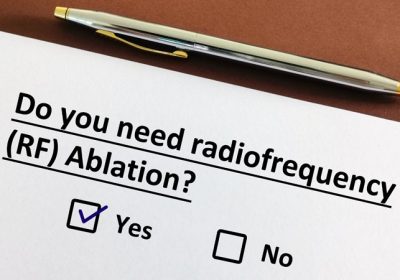 MONTREAL — In the treatment of thyroid nodules with radiofrequency ablation (RFA), the amount of energy delivered per unit volume of the nodule strongly correlates with the extent of nodule volume reduction after 6 and 12 months, suggesting an important indicator of treatment success.

The findings “provide an objective measure or goal energy input to achieve during the [RFA] procedure rather than relying only on the subjective judgment of sonographic changes, and in turn, produce more reliable outcomes for our patients,” first author Samantha A. Wolfe, MD, told Medscape Medical News.

Wolfe, of the Department of Otolaryngology – Head and Neck Surgery at Johns Hopkins University School of Medicine, in Baltimore, Maryland, presented the findings at the American Thyroid Association (ATA) 2022 Annual Meeting.

Commenting on the study, Insoo Suh, MD, an associate professor and associate vice chair of Surgical Innovation at NYU Langone Health, in New York, agreed that “an accounting of the total amount of energy delivered can be a useful additional data point for the operator when they are determining whether an ablation is successful.”

He noted, however, that the location of a nodule can be an important factor when deciding upon amounts of RF energy.

“Some target areas are too close for comfort to critical structures, such as the trachea or the recurrent laryngeal nerve, so sound judgment would dictate that the energy be dialed down in those areas, even if the price you pay is a slightly lower volume reduction,” he explained.

Analysis of Patients Given RFA at Johns Hopkins

RFA utilizes radiofrequency energy for the reduction of nodule compression and aesthetic symptoms, avoiding the need for thyroid hormone replacement or surgery.

And while decisions regarding RFA treatment location and duration are commonly guided by the operator’s judgment of sonographic changes, those assessments can potentially result in inconsistent outcomes.

In observing a relationship between higher amounts of RF energy and nodule volume reduction, Wolfe and her team conducted their prospective study of nodules treated by two experienced endocrine surgeons at Johns Hopkins between June 2019 and May 2022 at 6 and 12 months in relation to the amount of total energy delivered during the treatment.

The analysis included 101 nodules, which had a median initial volume of 12.9 mL.

In terms of the goal of achieving 50% or more volume reduction at 6 months, the median energy delivered was significantly higher for nodules that did reach that goal compared with those that had a volume reduction of less than 50% (2317 versus 1912 J/mL, respectively; P = .01).

In a logistic regression analysis, the amount of energy delivered strongly increased the odds of obtaining a volume reduction ratio of at least 50% (odds ratio [OR], 2.58; P = .048).

“Every twofold increase in energy delivered increases the odds of achieving a 50% volume ratio reduction by 2.58 times,” Wolfe explained.

Likewise, the same twofold increase in energy delivered also increased the odds of achieving a greater than 80% volume ratio reduction by 2.55 times (OR, 2.55; P = .038), she added.

Information May Help to Decide Who Needs Multiple Ablations

Of note, the effect was stronger with smaller nodules. Those with an initial volume of less than 20 mL had a significantly greater volume ratio reduction than nodules that were 20 mL or larger (61% vs 48%, respectively; P = .05).

“At 6 and 12 months, the successfully treated nodules had a significantly smaller immediate initial volume than those that did not,” Wolfe said.

“This information may aid in identifying patients with large nodules that are less likely to achieve a greater than 50% volume reduction ratio and may require multiple treatments,” she added.

Other factors — including the probe tip size and total energy delivered — did not significantly correlate with volume ratio reduction at 6 or 12 months.

There was also no significant difference in terms of thyroid stimulating hormone (TSH) levels among nodules that achieved at least a 50% volume reduction and those that did not.

Nodules that did not have a satisfactory volume reduction at 12 months had a relatively large median total energy value delivered during ablation (103,463 J compared with 25,969 J among those achieving more than 50% volume ratio reduction), which Wolfe said likely reflects that those nodules had a large initial volume.

“This speaks to the importance of describing the energy utilized per unit of nodule volume rather than just a gross measurement,” she said during her presentation.

Wolfe added that in terms of strategies for getting more energy into the nodule, a key approach is time.

“However, our research shows that by spending more time, and thus inputting more energy into the nodule, we had better volume reduction.”

Wolfe and Suh have reported no relevant financial relationships.