This Guy Did 100 Pushups Every Day for a Month 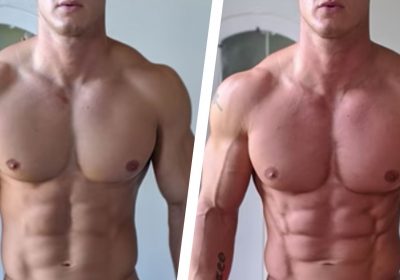 YouTuber MattDoesFitness is best known for his series of fitness challenges, which saw him taking on the Navy SEALS fitness test (and failing), the US Army fitness test (and failing), and pole dancing (that’s, well, subjective). Typically we, the viewers, get to learn from his failure. Often the lesson is that even the most carefully sculpted bodybuilder—which Matt is—can have some areas for improvement.

Following his attempt at the US Army fitness test, Matt realized that one of his weak points was pushups (he calls them pressups, as the move is known in the U.K.). If you’re nodding your head in agreement, check out this pushup progression to help you improve. Disappointed in his performance, he decided to test himself, realizing he could only do 46 pushups in a row. So he set himself a goal: 100 push-ups a day for the next 30 days (he previously did a 30-day, 100 situps a day challenge). And, of course, he made a video about it.

Matt started out by setting some rules. He did his best to keep good form, but admits he probably fudged one-third to a half of his pushups. Need a form check yourself? Check out our pushup guide.

He did them the same time every day, giving him 24 hours recovery time—which he admits was not ideal. And he didn’t stop working his chest during the 30-day challenge, either—he didn’t want to skip those workouts for a month.

So what did he learn? When he started, he could do 46 pushups at once, so it took him two more sets to hit the required 100. On day 30, he could do 61 in his first set, and it still took him two more to hit triple digits. His performance didn’t improve that much, in other words. Matt concluded that pushups are a convenient way for beginners to build muscle, but to keep making progress, he’d recommend that beginners add some resistance training to their repertoire and begin lifting weights.