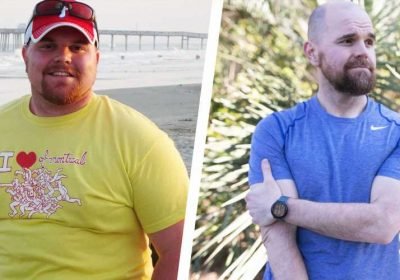 Andy Aupperle had never known himself as anything other than the “big guy.” Raised in Texas, he naturally gravitated towards football, where he played as an offensive lineman—and ate like one. Problem was, he continued to eat like a football player long after his playing days were over. “Playing massive amounts of video games and eating like crap, I topped the scales at 280 pounds,” he says.

By the end of 2017, Aupperle, 37, who now lives in Princeton, New Jersey and works as a nursing assistant, had convinced himself that he was fine with his weight. But when he had to make the change from size 40 to size 42 jeans, his mood sunk. “I needed to change my lifestyle,” he says.

In January of 2018, he took the first step, focusing first on his diet. He’d read about intermittent fasting—the diet plan in which someone typically eats for an 8-hour window, and takes 16 hours “off.” He gave it a try, and the weight began to fall off immediately—10 pounds in the first 3 weeks. Aupperle increased his fasting window to 20 hours, while keeping his calorie intake between 1200 and 1500.

Insetad of chips, pizza, and tacos, he was now eating salads, chicken, and seasoned veggies. With encouragement from his girlfriend, who he credits heavily for helping him stay motivated, he also took up running—begrudgingly. “I was slow and got winded so easily,” he says. “It wasn’t pretty at all, but I enjoyed being outside, so I kept doing it.” He’d set small goals—two minutes without stopping, and then increase the time. It wasn’t long before he was running 5K’s.

Yoga and bodyweight workouts soon followed, and it all started to add up: He was losing close to 15 pounds a month. By November, he’d hit his goal weight of 175 pounds, losing about 100 pounds total. “It took 11 months, but I kept reminding myself that I took 35 years to put on that weight. It wasn’t going to come off quickly or easily.”

His friends were amazed by the transformation. “Nobody had seen me skinny before,” he says. “Some of them weren’t even sure it was me.” Since losing the weight, he adds, he feels far more energetic, and takes more pride in the way he looks. And he continues to add new goals: At the end of April, he plans to run his first half marathon, and will be training for a full in November.

For anyone currently striving to hit their own weight loss goals, he advises them to be patient: “It’s going to take time for it to come off, but the results will come—you just need to be patient.”